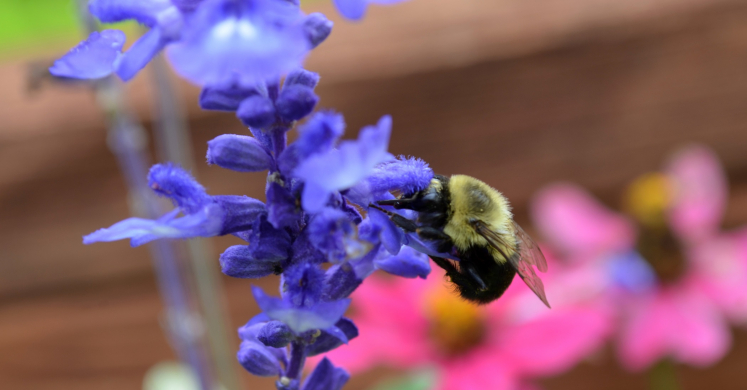 #bioPGH Blog: Bumblebees Having a Ball!

Have you ever seen a bumblebee playing ball? Here, I’ll show you!

What are these little bumbles up to? A recent study is in press, asking the question: do bumblebees play? The bees in the video lived in a controlled environment and knew that they could leave “home” and go straight to a nectar source. However, their route to the nectar included the option to stray off target and visit a little playroom, so to speak, with balls that the bees could roll around or completely pass by. Since so many decisions in nature are focused on the various trade-offs related to energy use, these bumblebees must have had a good reason to spend energy on an activity that ultimately wasn’t gaining them any food. So, were they really playing?

An important part of the question “do bumblebees play” is defining what play even is. We can identify play when we see it — we humans play as children and (yes!) adults, and we know that plenty of other mammals and even birds play. Even though play seems focused on fun and entertainment, play is a developmentally critical activity that allows “players” to learn and process social behaviors, develop fine and gross motor skills and enhance other important abilities. For example, research shows that human children engage social regions of the brain when playing with dolls, as opposed to playing with tablets, indicating that children process what they have learned about social structures through playing (side note here, this means that playing with dolls can be socially important for all children.) Play also activates an internal sense of reward, so it’s intrinsically enjoyable and we want to keep going back to it.

So if play is an activity that helps stimulate learning, builds strength and motor skills, and is ultimately just…fun…then, it would be absolutely fascinating that even bumblebees could take part in something like that. This study in particular noted that there are three primary categories of play: social play, which involves interacting with other individuals; locomotor play, which refers to a sustained (and unnecessary) exertion of physical activity like running, jumping, bouncing, skipping, etc.; and object play, which involves manipulating an object for no set reason — though those categories can obviously overlap. In this study, the bumblebees seemed to be engaging in object play as they were rolling around the play space on little balls. Especially when we consider that there is no immediate benefit to the expenditure of energy, it seems like they are engaging in something they “enjoy,” or at least want to spend time on. And the action of rolling the balls across the playroom may help the bees build dexterity or some form of motor skills. It does indeed seem like play, and it’s a fascinating step forward in our understanding of insect cognition!

If the idea of animals at play has you intrigued, here is a video of a few other species working on some fun learning!

In this video of dolphins at play, I suppose this counts as object play if you consider the unsuspecting pufferfish to be an object.

Don’t even think about stealing this little panda’s green ball!

This video of interspecies play might be my favorite. As this little one runs back and forth to play with a gorilla about his own age, I can’t help but see a glimpse of blurred lines between what we deem to be the human world and the rest of the wild world.

I finally got to read this email and I am smiling from ear to ear. I was flooded by Ian and still not back in my house with 4 pets. This made my evening. Thank you.