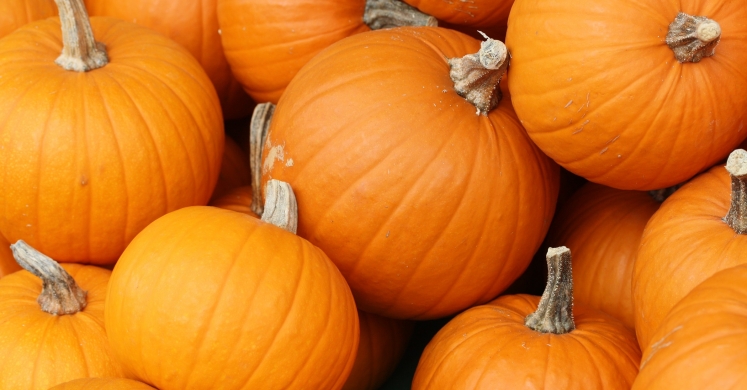 We have reached the peak of pumpkin season! Between the jack-o’-lanterns, Thanksgiving centerpieces, pumpkin pies, pumpkin decorations and lattes, our favorite squash are living their best botanical life for a few more days until evergreens and holly slide in on a frosted sleigh. Since many of us have a large meal coming up soon, where conversation could either flow like gravy or could be as dry as stale cornbread, I have five pumpkin fun facts for you to share at the table whenever the Dinner Muses need some inspiration.

What’s in a Name?
The first pumpkin tidbit to tease out is their name. What is a pumpkin? Broadly speaking, most of what we call pumpkins are a kind of winter squash — a group of squash with a thick rind that that keeps longer than its cousins the summer squash like yellow squash and zucchini (though zucchini and many pumpkins are actually cultivars of the same species!). The common name “pumpkin” is often used to describe cultivars from four different species of squashes: Cucurbita pepo, Cucurbita maxima, Cucurbita argyrosperma, and Cucurbita moschata. Colloquially, any orange and generally round or “pumpkin-looking” squash can end up being called a pumpkin, but Cucurbita pepo. is the most common species behind the fruit and there are a number of Cucurbita pepo cultivars.

Pumpkins — A Fruit or a Vegetable?
Botanically speaking, pumpkins are fruit! A “vegetable” is a culinary term, but a fruit is the mature ovary of the plant with seeds inside. That is why many “vegetables” we eat on a regular basis are actually fruits, such as tomatoes, cucumbers, green beans, bell peppers and various squash, including, of course, pumpkins!

Is the Top a Stem or Vine?
You know the “handle” on top of a pumpkin the store? Is it a vine or a stem? It’s a peduncle! It’s a stalk that connects the pumpkin to the main vine (the actual stem). Beyond pumpkins, a peduncle is a stalk that offshoots from a main stem to support a flower, an inflorescence, or (later) a fruit.

What Are the Pumpkin Guts?
And now the big question I’m sure we all have asked at one point or another while carving jack-o’-lanterns: What are the pumpkin guts? Those stringy things inside the pumpkins are usually referred to as fibrous strands. They connect the flesh of the pumpkin to the seeds to deliver nutrients! (But I'll admit, for Halloween, "pumkpin guts" sounds more fun.)

Where Did Pumpkins Comes From?
Cucurbita pepo squashes like zucchini, gourds, pattypan squash, etc. were cultivated from an ancestral squash somewhere in Central America or Mexico somewhere between six and nine thousand years ago.

Have a Happy Thanksgiving, everyone! Enjoy time with family, eat some delicious foods, share some pumpkin fun facts and enjoy some time outdoors on Friday if you can!

Connecting to the Outdoors Tip: Since there will plenty of veggies around this house this week, it could be the perfect time to dive into some squash botany! Even though the various C. pepo squashes look very different on the outside, what traits do they actually share? If you cut open a pumpkin, acorn squash, and zucchini, what do the insides look like? How are they the same? How are they different? How many seeds do they have? A few or many? How are the seeds shaped? What if you compared a zucchini to something completely unrelated like an apple or a peach? How are the fruits all similar? How are they different? Can you guess what traits would help group your pumpkin and acorn squash together as a species compared to an apple or peach?