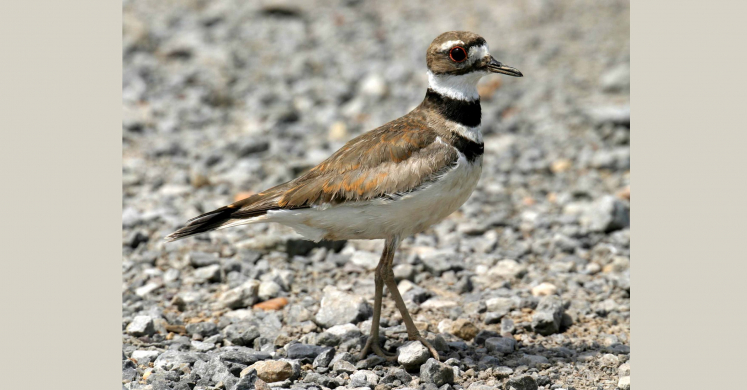 Over the weekend, my husband and I were walking our puppies when we heard a high-pitched, frantic bird call. We paused on the sidewalk, and some yards up ahead of us was a killdeer — shaking its wings at its side and trilling away like an injured animal. It hopped forward a few more yards, and we slowly advanced a few feet. Again, it hopped forward a few more yards, and we slowly continued on our path…but this time we looked behind us. Sure enough, off to the side and somewhat behind us, four killdeer chicks were being herded around a parking lot by another adult killdeer. The bird ahead of us was doing a “broken wing” display to distract us and lead us away from the babies we had unwittingly strayed too close to.  Not wanting to stress this individual (or the babies), we turned to a side path as quickly as we could and left the little birds alone.

The broken wing display that we saw is a classic behavior of killdeer (Charadrius vociferus), and it’s generally quite effective against predators who assume that the “injured” parent will make a quick and easy meal. Instead, the predator is led astray further and further from the actual chicks who would indeed be an effortless meal (those little ones bopped around the parking so oblivious of potential danger!). Killdeer may be quite common summer birds here in Pennsylvania (and indeed, they are widespread across North America), but they still have a few tricks up their feathery sleeves. Let’s learn a bit more about them than just their theatrical abilities!

First of all, killdeer are rather odd ducks as they are technically shorebirds. They are in the taxonomic order Charadriiformes, along with birds like plovers, sandpipers, gulls, oystercatchers, and more; but killdeer take advantage of quite a few different habitat types than their fellow water birds do. They can be found in flat expanses of land with short vegetation or even just gravel, meaning they can nest in parking lots, backyards, meadows, golf courses, airports, and even flat building roofs (though that is generally not ideal for chicks). Like their water-faring friends, killdeer primarily eat invertebrates, though they lean more heavily on insects than coastal birds. They will eat a variety of diet items such as insect larvae, beetles, centipedes, grasshoppers, spiders, worms, snails and even small crayfish.

The other intriguing thing we noted over the weekend was that there actually wasn’t just one adult corralling the chicks — there were actually two, though one seemed to be taking the lead. At the time, we mused that maybe there were multiple families, or some if a few random adults were hanging around and the parents just didn’t mind. The bird offering the distraction was clearly a parent, putting themselves in harm’s way to protect the chicks. But what about the bonus bird? I did a bit of digging for this post, and killdeer have been observed to be polygamous. Was that what we were seeing? After such a brief encounter, it’s impossible to say, but since a variety of polyandrous species exist even within the Charadriiformes, it seems safe to at least say that nature will use whatever strategy works out best.

Connecting to the Outdoors Tip: Killdeer prefer wide open areas with low or no shurbby vegetation. If you're out to spot some, your best bet would be near large, empty parking lots, gravelly low hillsides, and some meadows.

Killdeer - All About Birds, The Cornell Lab