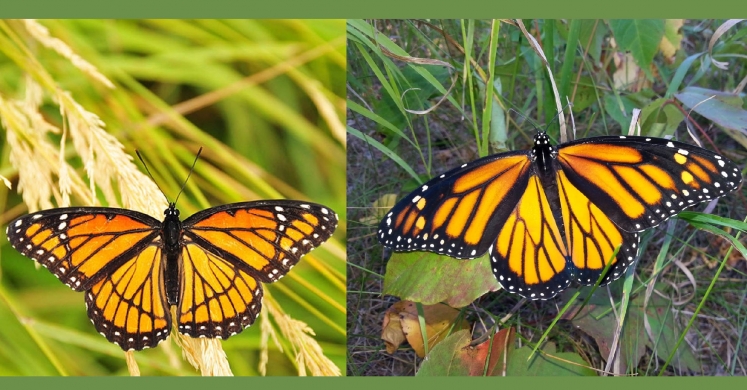 Last night the spooks and ghouls were out for trick-or-treating, a time-honored tradition that includes the best of costumes. While we humans dress up to “mimic” our favorite superheroes, characters, or the inner workings of our imaginations, nature has its own bag of tricks or treats. In the spirit of costumes, a fascinating “trick” in nature is called mimicry. Let’s explore!

First of all, the word mimicry can be used to describe a few different phenomena in the natural world. For example, mockingbirds and parrots mimic a wide variety of sounds and other birds’ calls. In another example, some amphibians and insects of one sex will mimic the behavior of the opposite sex either to sneak their way to possible breeding opportunities or to avoid breeding at that particular time altogether. There are even caterpillars that strikingly resemble snakes! (And I do mean “striking,” as the caterpillars even copy the quick movements of a striking snake; see the National Geographic video below!)

In some way or another, a wide variety of species have adapted a few tricks to ensure survival! When biologists describe mimicry to describe predator-prey interactions, though, they often are referring to two very specific kinds of mimicry: Müllerian mimicry and Batesian mimicry.

Müllerian mimicry occurs when multiple species resemble each other, and all of them are noxious or toxic to potential predators. Some familiar examples are the warning coloration of yellowjackets, hornets, and some bees. Normally, we Pittsburghers love black and yellow, but when we see them on an insect, it’s a warning to us that there is the possibility of being stung. The advantage of Müllerian mimicry is that a common warning pattern (e.g., black and yellow stripes) becomes a recognizable sign of danger, which helps protect all of the similarly-patterned insects. It also helps those of us who fear stings because we only have to remember one general warning sign.

Without knowing the exact species, we can readily identify based on the color pattern to be wary of both of these.

Batesian mimicry, though, is the real trick or treat. This form of mimicry describes when a non-toxic species resembles a species that actually is dangerous (venomous, poisonous, etc). A classic example of this is the milk snake and the coral snake. With only a quick glance, these two species can be difficult to tell apart, yet one is highly venomous while the other is harmless.

We can still have trouble despite the mnemonic rhyme that references their different color patterns:

Red on yellow scare a fellow,
Red on black, friend of Jack.

Other famous examples of this are butterflies like the viceroy that closely resemble monarch butterflies, which are generally toxic to potential predators (though at least one study suggests that viceroys may not be palatable themselves, which would actually make them Müllerian mimics). An unusual but fascinating example would be some species of moths that intentionally mimic the warning sounds made by unpalatable tiger moths to avoid predation by bats!

These examples have all been animal-based, but plants display mimicry as well, though they are less studied than animals. In plants, one example of mimicry is found on the leaves of passion flowers in South and Central America. Butterflies lay eggs on passion flower leaves to provide food for their larvae upon emergence. Some leaves, however, develop little “spots” that bear a striking resemblance to the butterfly eggs. Since butterflies will avoid laying eggs on a leaf that is already occupied, these egg-like spots seem to protect the plant from losing some its leaves to butterfly larvae. Quite a trick!

These are just a few examples of nature’s own tricks to get treats, but there are many more out there. Just be sure to keep exploring to find them!

Connecting to the Outdoors Tip: If you ever spot a tricky animal or plant that you have trouble identifying, and you can get a picture of your subject, the app iNaturalist has an active online community of nature enthusiasts that can help you ID a tough specimen.

National Geographic: Why This Harmless Caterpillar Disguises Itself as a Venomous Snake