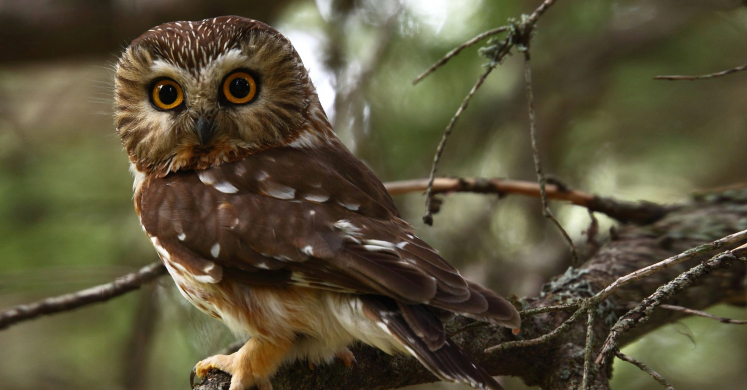 Imagine walking through the woods one evening, and hearing this cry:

A bit startling! That is one of the calls of a Northern saw-whet owl – a bird of prey not much bigger than a robin. This time of year, from late October until early December, we in Western Pennsylvania have the best chance of seeing saw-whet owls as they migrate for the winter. (The birds are Pennsylvania residents, but their breeding distribution is largely limited to the northern half of the state.) Let's learn more about this little visitor!

Saw-whet owls are admittedly…well…adorable, but like other owls, they have a variety of adaptations that make them fierce little predators. First of all, owls are nearly silent fliers. Most of us have heard the wing flaps of ducks or songbirds as they take-off, but you won’t hear that from owls. This is possible for a few reasons: first, owl flight feathers have fluffy “serrated” edges, which helps muffle the sound of feathers moving through air. Another adaptation for silent flight is their large wing size compared to their bodies. This allows owls to fly more slowly than other birds, which helps with silent flight. Saw-whet owls tend to focus on rodents—they must be a mouse’s worst nightmare!

Another owl superpower comes from the collective adaptations of their eyesight. You’ve probably noticed that owls have surprisingly large eye size relative to their skulls. To make a comparison: if our eyes were as large in our skulls as owl eyes are in their own skulls, we would have eyes the size of oranges! Large eyes allow owls to pick up any light in their dark, nocturnal environments. This advantage comes with a tradeoff, though. Owls actually don’t have round eyeballs the way we do. Rather, their eyes are more comparable to tubes with rounded lens, cornea, and iris in front. Also, owls lack the muscles to move those eyes within their orbitals (eye sockets). So while we can look to one side or the other without moving our heads, owls can’t do that. However, bird heads in general have a greater degree of rotation than us because they have more neck bones (also called cervical vertebrae) than we do. In fact, most species of owls have twice the number of vertebrae in their necks that we do (14 versus our 7. Even giraffes only have those same 7 cervical vertebrae!) Owls cannot turn their heads all the way around though—that’s just a myth.

Owls are fascinating as a group of birds, but they still have quite a few mysteries up their feathery sleeves. For example, though we know where Northern saw-whet owls breed in the summer, their winter travels and destination are still largely a mystery. A Pittsburgh team is working on that mystery, though! Ornithologist Bob Mulvihill at the National Aviary is a part of the effort to understand where exactly the birds are going during the migration. From October to December, Bob leads an Aviary team to band saw-whet owls that pass over our area as a part of their migratory journey. Once they are banded, the birds can later be identified if they turn up at other banding stations or by bird watchers; the goal is that will help reveal more about the birds’ annual movement. And actually, this is an important lesson for budding biologists out there – we still have so much to learn about our natural world, we have to keep exploring and asking questions!

Connecting to the Outdoors Tip: If you’re all about owls, now until early January is “owl prowl” season. Reach out to a responsible bird-focused organization and what sorts of night hikes they have to offer!