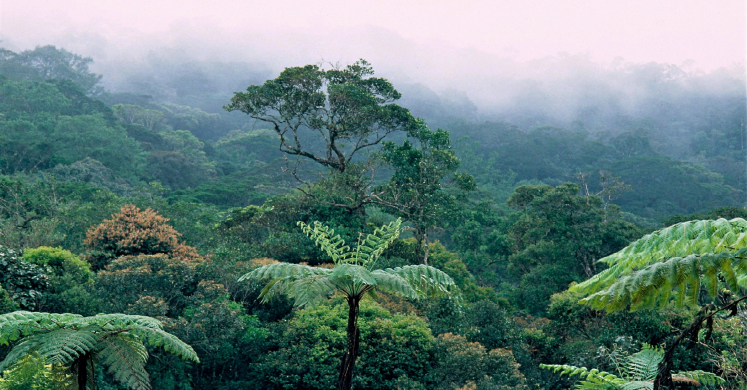 On a chillier evening last week, I caught myself daydreaming back in time — though it wasn’t quite my time. I found my thoughts wandering far, far back to a quite tropical time in Pennsylvania’s history, eons before our days as a temperate woodland forest. Then I mused over what a sight it would be to see mastodons and wooly mammoths here in Pennsylvania. As we wait out the last whims of winter before the switch to spring, would you like to take a little trip with me to Pennsylvania’s yesteryear?

For our first stop, pack your swim suit! If we begin our stroll with a look back at a time between 570 and 400 million years ago, Pennsylvania was mostly under a shallow portion of the salty waters of the Iapetus Ocean — quite a contrast to our current situation. As the continents shifted as part of their perpetual dance, a series of magmatic continental arcs arose further south in what was at the time Gondwanaland, current day South America. This arc, a long stretch of volcanoes that formed where continental crust met ocean floor crust, grumbled with activity 485-458 million years ago. The far-traveling ash from this active period is still visible in the central and eastern part of Pennsylvania in the form of carbonate rock.

Our state remained underwater for quite some time, but if we travel to the Carboniferous period, which began 359 million years ago, Pennsylvania was a warm, humid, tropical swamp at the edge of a retreating seaway. At this point, Pennsylvania was still around ten degrees below the equator. As a bit of perspective, Florida’s Southernmost Point Buoy at the far reaches of the Keys is currently 24 degrees above the equator. The area was still subject to sea water floods, which we can see the evidence of in the Pine Creek and Ames limestone deposits here in the Pittsburgh area. In the image below, you can see the fossil of a brachiopod, a marine organism, I found in a layer of exposed limestone along Route 8. (Safety first! The area is known to have falling rocks; I visited with permission and while wearing a hard hat.) 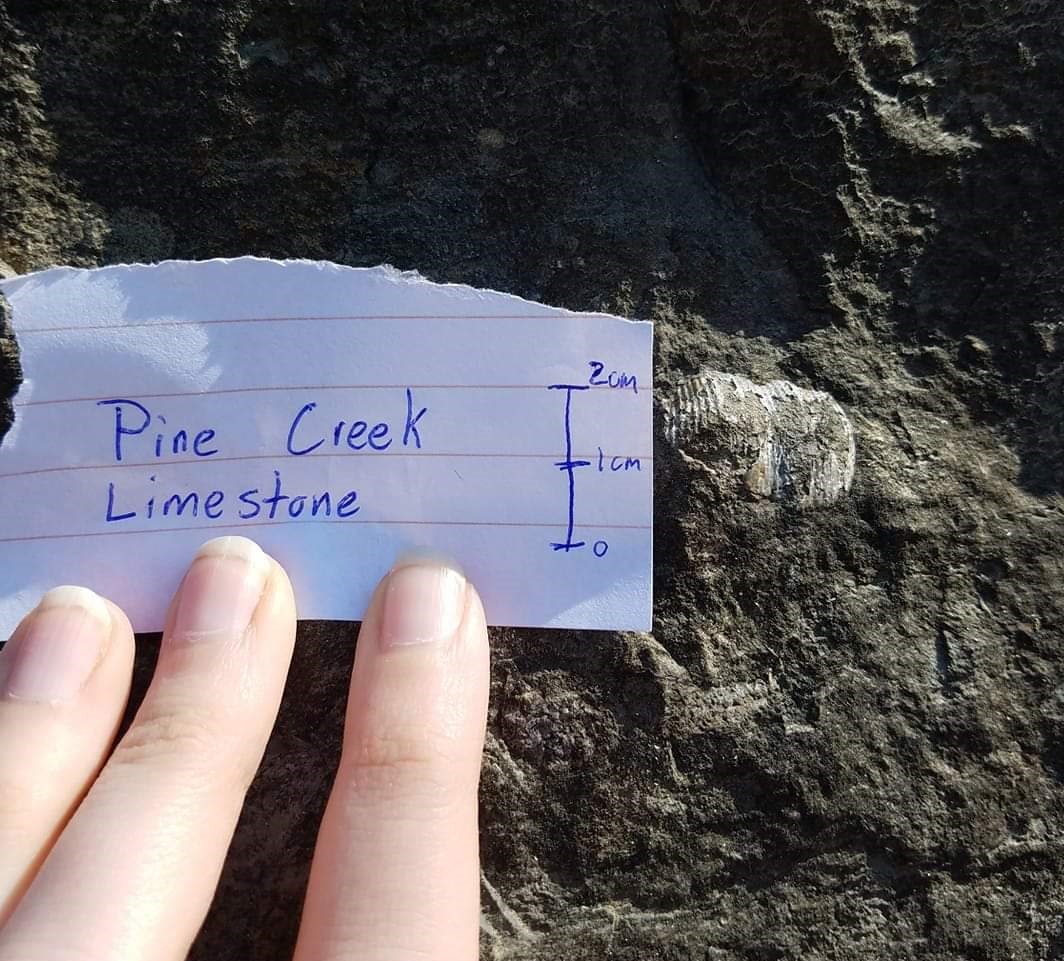 Even if we try to imagine a tropical paradise, though, Carboniferous Pennsylvania would still be something altogether different than what we picture. Flowering plants didn’t appear until the Cretaceous period, over 150 million years after the Carboniferous; and plants with seeds were still relatively new on the scene. Instead, the tropical Western Pennsylvania of the Carboniferous would have been covered in towering tree ferns and club moss trees, and bogs of thick peat abounded. Notably, evidence suggests that this is the first time period for amniotic eggs — eggs with protective membranes inside the shell, as opposed to the non-amniotic eggs of fish and amphibians. This allowed greater land use among animals since now the eggs wouldn’t dry out! Early prominent larger animals at this point were reptiles and archosaurs (the precursors to dinosaurs, birds, and crocodiles). As long ago as this was, we can see evidence of this time period in our state’s coal seams. In the picture below, I found a lump of coal in an exposed outcropping in the South Hills, and you can clearly see the impressions of plants from a long-gone era. It was quite a different world! 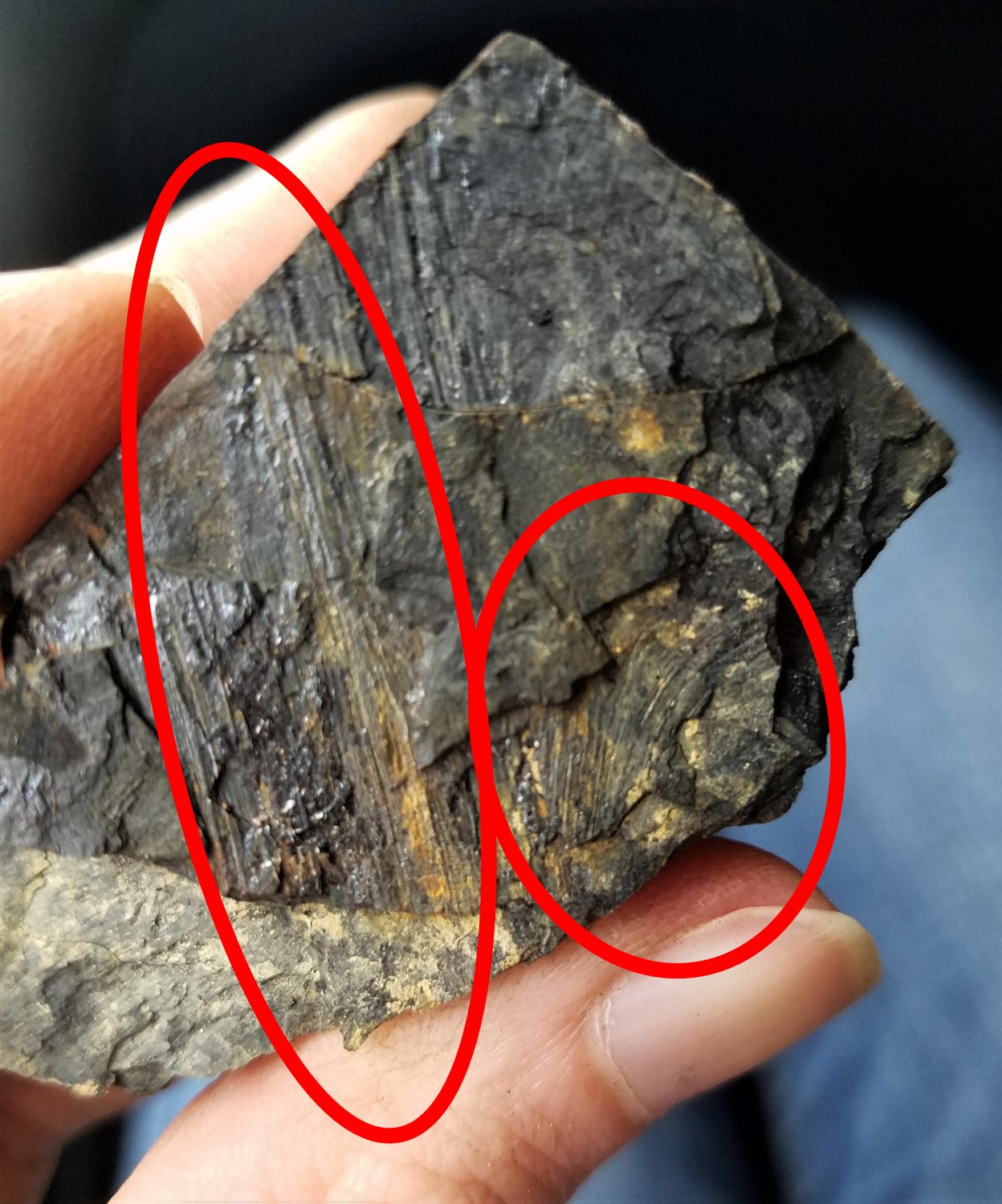 Over the next series of periods and epochs, our little patch of Pennsylvania dried out in the middle of Pangaea and later became humid and tropical again as the super-continent broke apart. It would be millions of years before Pennsylvania eventually shifted to the Northern Hemisphere and cooled. We can watch that process play out in this video below from the California Academy of Sciences, which begins about 200 million years ago.

As you have probably noticed from our travels through PA time thus far, the Earth’s continents and climates have always changed over time.  Along with shifting continental plates, we see resulting changes in the ocean currents, and if we combine that with natural variations in the Earth’s orbit, cycles of solar radiation, and some other factors, we can easily see why over millions of years, there has been quite a variation in climate.* But now you can trade that swimsuit from earlier in for a parka because our next stop on our journey through Pennsylvania time is...the ice ages!

How did the planet shift from a primarily warm place to being covered in sheets of ice thousands of feet thick? Several natural cycles played a role, but it is thought that a major factor in the most recent ice ages was the emergence of a land bridge between North and South America. This land bridge separated the Atlantic and the Pacific, forever changing global oceanic currents and accompanying climate patterns.

In this image from NOAA, we can see Pennsylvania right at the boundary of the Last Glacial Maximum.

Technically, we are currently still in an ice age than began roughly 115,000 years ago — we are just in a warmer interglacial period. The Last Glacial Maximum, the point of the highest glacier coverage from this current ice age, occurred approximately 20,000 years ago. At that time, Pennsylvania was a tundra, still not the forests we know today. There would have low shrubby plants, grasses, and conifers, but as temperatures warmed with the retreat of the glaciers, deciduous trees moved into the area. During this last Ice Age is where we see Pennsylvania hosting the megafauna of the Pleistocene. Wooly mammoths grazed the grasses and shrubs, mastodons browsed leaves and young shoots, while huge ground sloths, giant armadillos, sabre-tooth cats, camels and hyenas once roamed these lands — how wild is that?!

Well, this brings our chronological wanderings back up to the present day. Signs of the tropical swamps and frozen walls of ice live on in the geology and paleontology of the state, and it certainly informs our understanding of the present to recognize where we have been. We may not have the balmy temperatures, dinosaurs or wooly mammoths of the days of yore but our modern Pennsylvania is wonderfully worth exploring. And as strange as it may seem, as our migratory birds come back from their wintering grounds, keep in mind that you are probably witnessing a biological phenomenon that will be ancient history to those who will tell the tales of us in the epochs to come!

*It is important to note that while, yes, the global climate has always changed, we humans have caused a change in climate that is unprecedented in speed due to our greenhouse gas emissions over the past one hundred and fifty years. It is not accurate to compare the naturally changing climate to the human-made climate change we are unfortunately seeing today.