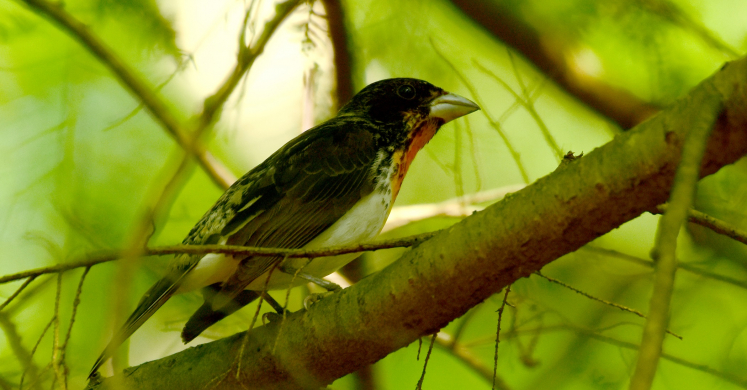 #bioPGH: The Case of the Curious Grosbeak

Have you ever been thoroughly befuddled when trying to identify a plant, bird, or insect while on a hike? Well, we all know after our Coopers versus Sharpies conversation, I certainly have! In those moments, after checking through ID guides to no avail, perhaps I upload the image to iNaturalist and hope some crowdsourced community science will help my cause. Last summer, though, a local birder ran into a slightly different scenario of being stumped by a feathered friend, and it led to an incredible find. Let’s hear the story…

It was a quiet morning in June last year. Steve Gosser, a nature photographer and avid birder from McCandless Township, decided to head to McConnells Mill State Park to do some birding. When Gosser arrived at the park, the trees were in full summer leaf, in which many a bird hide. Luckily, as we will note in a moment, Gosser knows his bird calls quite well.

“I was trying to look for some of the warblers I was hearing, but that was one of the mornings where it seemed like no one was cooperating as I was trying to take pictures. And all this time, what sounded like a scarlet tanager was just calling and calling from way up in the trees, so I thought well, maybe I will look for this one instead.”

Gosser followed the sound of the calling bird and settled himself below the source of the crooning.

“I waited for a moments to just see what I would could see, and all of a sudden a bird flies past, but since it was coming from where the scarlet tanager had been, I was expecting a bright red bird but this one was really dark.”

“It was a rose-breasted grosbeak!” he recalled. “And I thought, well surely that couldn’t be what I was hearing…but then I see it singing — and it’s singing like a scarlet tanager!” 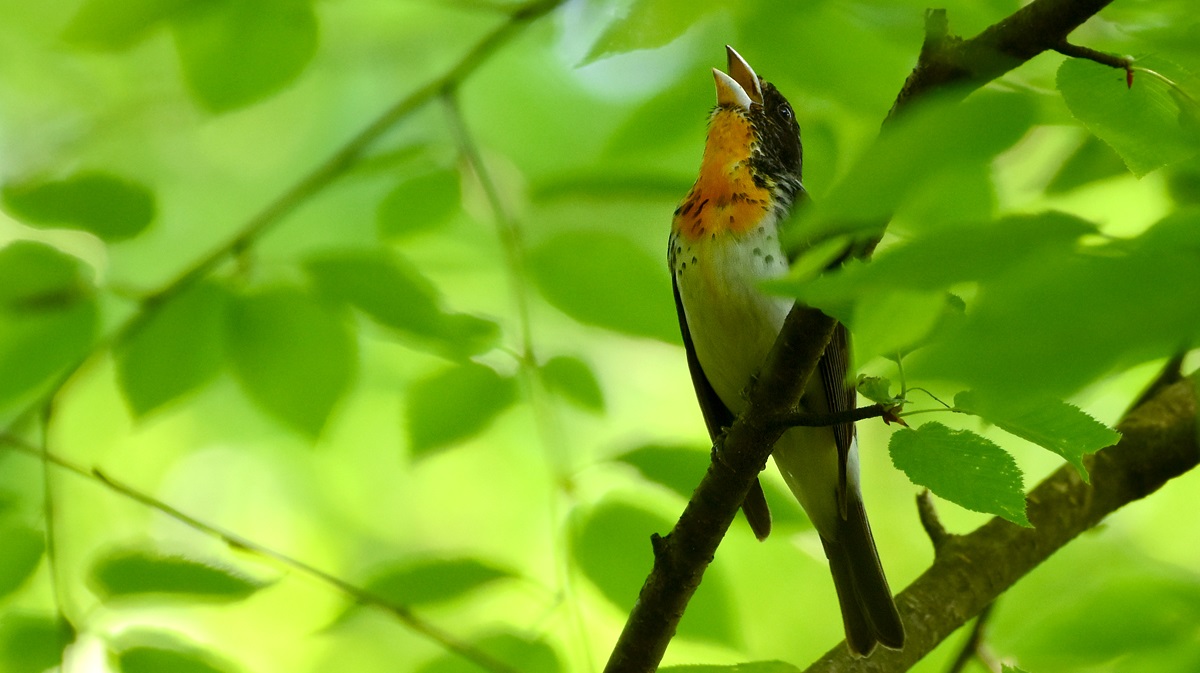 Steve spent the rest of the morning trying to take pictures and noting the song of this strange bird who looked like a grosbeak, mostly, but sang like a scarlet tanager. While taking pictures, he noticed the plumage on this bird just wasn’t quite right for a rose-breasted grosbeak. He texted a few pictures to National Aviary ornithologist, Bob Mulvihill, whose immediate reaction was “That is one weird bird you got there, Steve.”

The next morning, two Aviary researchers joined Gosser back the park where they were able to catch this mystery bird in a mist net and draw a blood sample for analysis. Upon closer inspection, they were able to confirm what Gosser had noted in his pictures from the previous day, that there were distinct differences in this bird’s feathering as compared to a rose-breasted grosbeak. This bird had solid black wings, notably missing the white wing bars on a normal rose-breasted grosbeak. They also noted that the red color on its upper chest extended all the way up the throat and to the beak. The bird’s bill also didn’t look quite as thick as a normal grosbeak (grosbeak literally means “large beak.”) From everything they could see, this bird truly looked and sang like a hybrid between a rose-breasted grosbeak and a scarlet tanager. 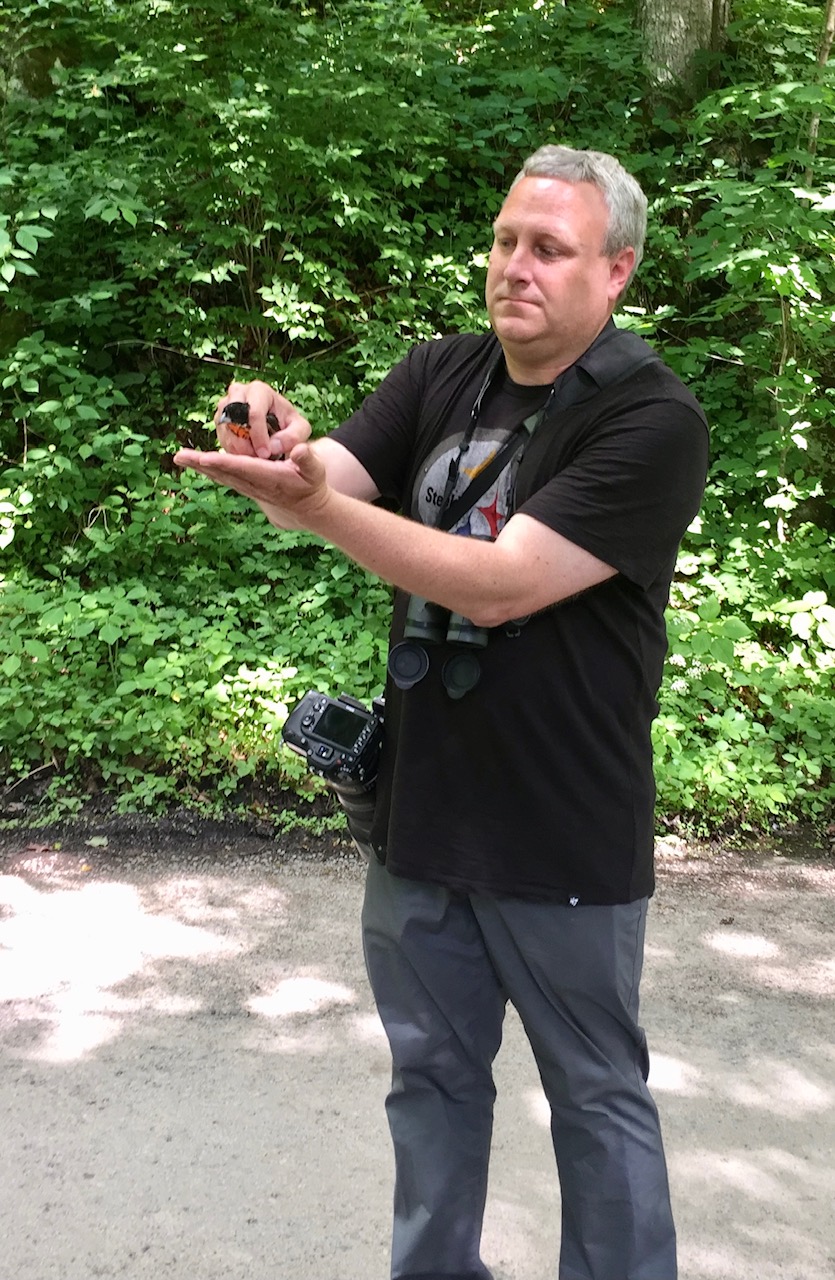 After data collection, Gosser released the mystery bird back into the wild himself.

Now, months later, DNA results delayed by the pandemic have finally revealed that Gosser’s discovery really is as wild as it seems —the bird truly was a hybrid! The mother would have been a rose-breasted grosbeak, and the father was either a scarlet tanager or a western tanager (the two species were too genetically similar to differentiate, but since it was in southwest PA, it was most likely scarlet tanager.)  And after a scientific literature search, it doesn’t seem like this combination has ever been seen before.

What is particularly interesting here is that rose-breasted grosbeaks (Pheucticus ludovicianus) and scarlet tanagers (Piranga olivacea) aren't even in the same genus of birds (though they are in the same family, Cardinalidae). Granted, they do share some life history traits. Both species overlap geographically here in Pennsylvania, they both prefer forest habitat, and they are both insectivores – so they are bound to at least cross paths in the wild. Yet they have different songs, different nesting behaviors, and their wintering locations and migrations overlap somewhat but are certainly not identical. All in all, this is quite exciting!

What a find for Western Pennsylvania! Of course, there are so many questions we may never have answers to. How did this hybridization come about? What circumstances could have been involved? And will the male hybrid return to the McConnell’s Mill area again this coming year? Would we have noted the bird if Steve Gosser hadn’t been at the right place at the right time?

When I talked to Gosser about the discovery, the awe and appreciation for the find were clear in his voice; and for all the science, maybe there was just a hint of fate dusted over the whole event:

“You know, I’d only been there a few times for birding,” said Gosser. “So it was kind of amazing that I picked to go there that day.” 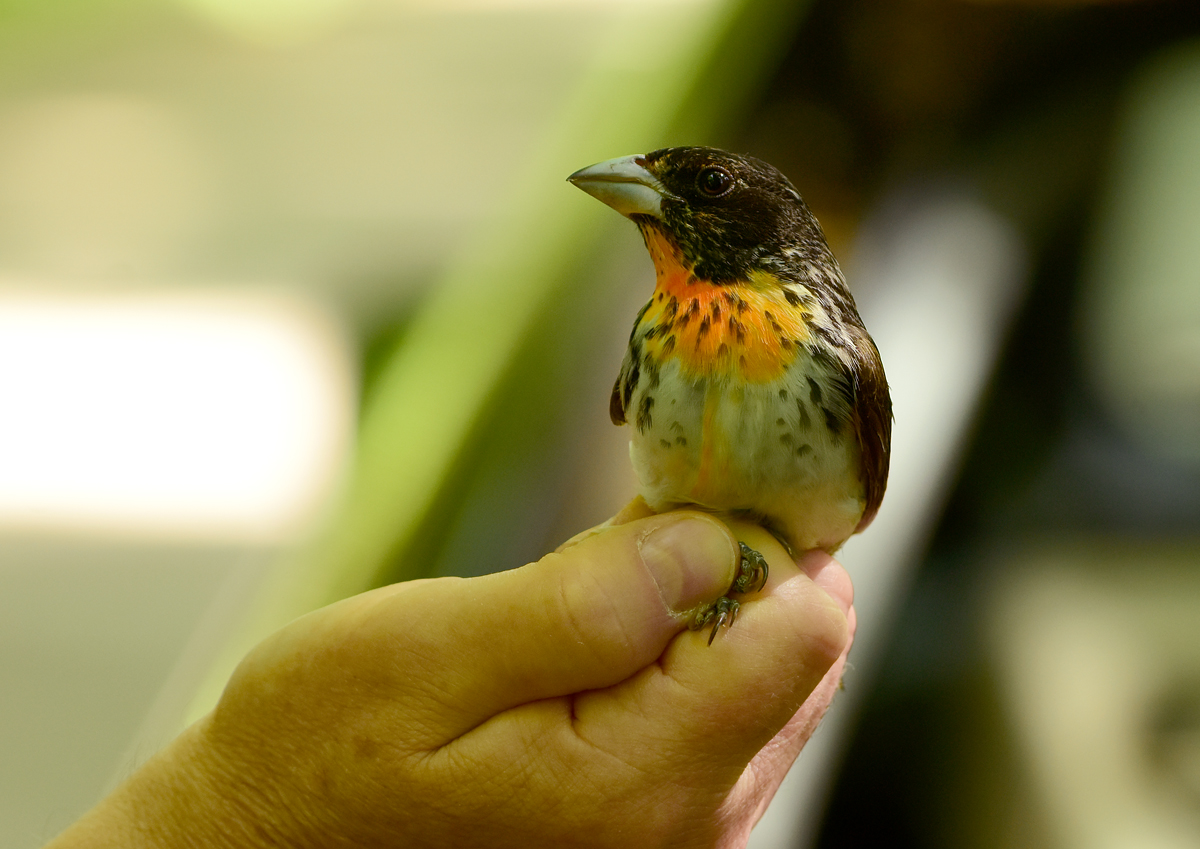 Connecting to the Outdoors Tip: Steve Gosser's story completely embodies the fact nature has so many secrets that we still don't know about. The next time you go on a hike, just let yourself wonder. You may not find a hybrid bird, but let nature suprise you!

Wow! Very exciting! Does this mean that bird species could be trying to adapt to loss of habitat, climate change and dwindling numbers to increase their numbers via inter-breeding?

How do scientists name this, as a new species or just a mixed breed bird.

Kathy - we’re not sure what pressures the parents may have been responding to. Both species are fairly common, and it’s complete speculation as to what may have happened. Maybe there was a migration or migration timing issue, perhaps one of the parents learned the “wrong” song as a nestling. It’s such a teasing riddle, and we may never know!

Ernie - good question! The scientific findings are being drafted and submitted as we speak, and there has been some “joking” reference to the bird as a “Scarlet Gosserbeak” - a play on both species and Steve Gosser’s names. I’m rather partial to that moniker!