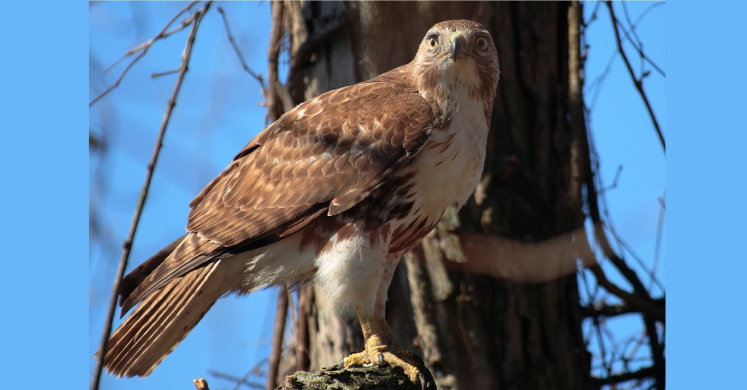 Red-tailed hawks (Buteo jamaicensis) have an impressive vocalization — so impressive, actually, that it’s fairly common to watch a movie or stream a TV show with a majestic bald eagle gracing the screen…only to hear it cry with voice of a red-tailed hawk. The hawks have a striking vocalization that all at once sounds powerful and intimidating, and perhaps a bit raw and edgy. Hear a comparison below:

Recently, though, I’ve been hearing a slightly different call in my neighborhood and the contrast is nearly as stark as the hawk versus the eagle:

It’s still the call of a red-tailed hawk, but this one is from an immature individual. And over the past month, we’ve been seeing and hearing two of these juveniles above our backyard — often, to our chickens’ dismay!

Red-tailed hawks are one of the most common birds of prey in North America. They can be found as far north as Alaska and Canada and as far south as Central America, and in between they range from east coast to west coast. Since they have such a wide geographical range, it makes sense that red-tails are also adapted to a wide variety of habitat types such a meadows, grasslands, scrub lands, deserts, forest edges, and habitat types modified by human use, such as pastures near major roads and airports. They specialize in small mammals, which means moles, voles, rats, mice, and rabbits are all possibly on the menu, but they certainly won’t turn down a bird or snake dinner if they can catch them. Like other birds of prey, they will also investigate carcasses for a quick, easy meal.

These two juveniles in my neighborhood still appear to have quite a lot to learn about the world, and that most essential of survival skills, hunting, doesn’t come easily. Once juveniles have fledged the nest around 6-7 weeks old, parents may continue to help feed them for up to two months while the young painstakingly learn to find their own dinners. One researcher even noted that while observing juvenile red-tailed hawks as part of a study, none of the hawks had success capturing vertebrate prey (mammals, birds, fish – anything with a backbone) for 42 days after first leaving the nest! From what I noted of my two local juveniles, smooth flying was still a work in progress, let alone hunting!

While trying to learn as much as possible about my young neighbors, I reached out to Katie Fallon of the Avian Conservation Center of Appalachia (ACCA), an organization just outside of Morgantown, West Virginia, that rehabilitates hundreds of birds each year. She confirmed that the steep learning curve I was seeing from my neighborhood duo was par for the young hawk course.

“We usually start seeing juvenile red tails around this time of year,” Katie noted. “Often emaciated, pretty dehydrated. Maybe sometimes injuries, but it’s more of what we call ‘fail to fledge.’ Parents probably stopped supporting them but they still just hadn’t seemed to be able to take care of themselves.”

Katie explained that’s where the ACCA can step in.

“We often can get them back to health, rehydrate them, feed them, and hopefully release them — give them a second chance.”

I mentioned that my chickens weren’t the happiest about the current neighbors. Chickens aren’t the first prey item that hawks typically go for (though nothing will turn down an easy meal), but Katie shook her head at the absurd lengths these inexperienced hunters might accidentally go through for naught.

“We do sometimes see young red tails get themselves in trouble by something like trying to get into a chicken coop, but then getting themselves stuck. Now they’re in a position where they can’t get a chicken and they can’t get out. It’s never the adults that have that kind of problem.”

She shook her head, laughing ruefully.

“Young red tails are kind of like the ‘new’ vampires in the Twilight books. They’re really hungry, very strong, and they want to attack everything but really aren’t smart about it and have no idea what to do with their strength.”

That does indeed sound like my “little” neighbors who still bobble in flight and haven’t decided how to handle smaller songbirds mobbing them. They still have a lot to learn!

Until they do, I will just keep watching for them to appear on my shed or in the trees in my backyard!

Connecting to the Outdoors Tip: If you’re interested in learning about red-tailed hawks or the ACCA, check out the ACCA’s Facebook or Instagram pages for stories about recovering birds. They are a largely volunteer-based organization, currently with around 40 regular volunteers. Outside of rehabilitation work, the ACCA does educational presentations with non-releasable birds, and they collaborate with researchers studying lead [accidentally ingested by] scavenging birds of prey.