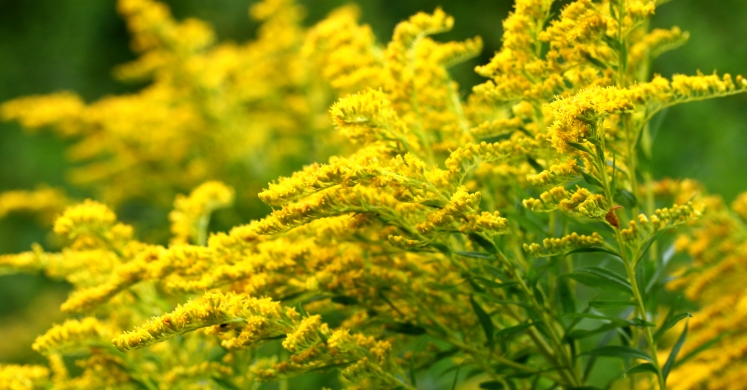 After what usually feels like a long winter, spring wildflowers and their gentle bursts of color are always a heavily-anticipated blooming event. What about late summer, though? While we await the dramatic show that is fall foliage, the month of September usually takes a final floral bow with an array of asters that bloom as the season begins to set. There are many to see, whether they are tiny dots of white-pink and purple or the dramatic bold of golden rod, fall flowers are the perfect twilight to summer.

Goldenrod
Goldenrod is the common name for the Solidago genus of the Aster family. The genus boasts more than 100 species, most of which are native to North America and produce tall spikes of showy flowers in varying yellow hues and can bloom from August to October. Goldenrod has heavy and sticky pollen (it is not airborne like ragweed pollen) and is pollinated by a variety of insects like bees, wasps, flies, beetles, and butterflies. 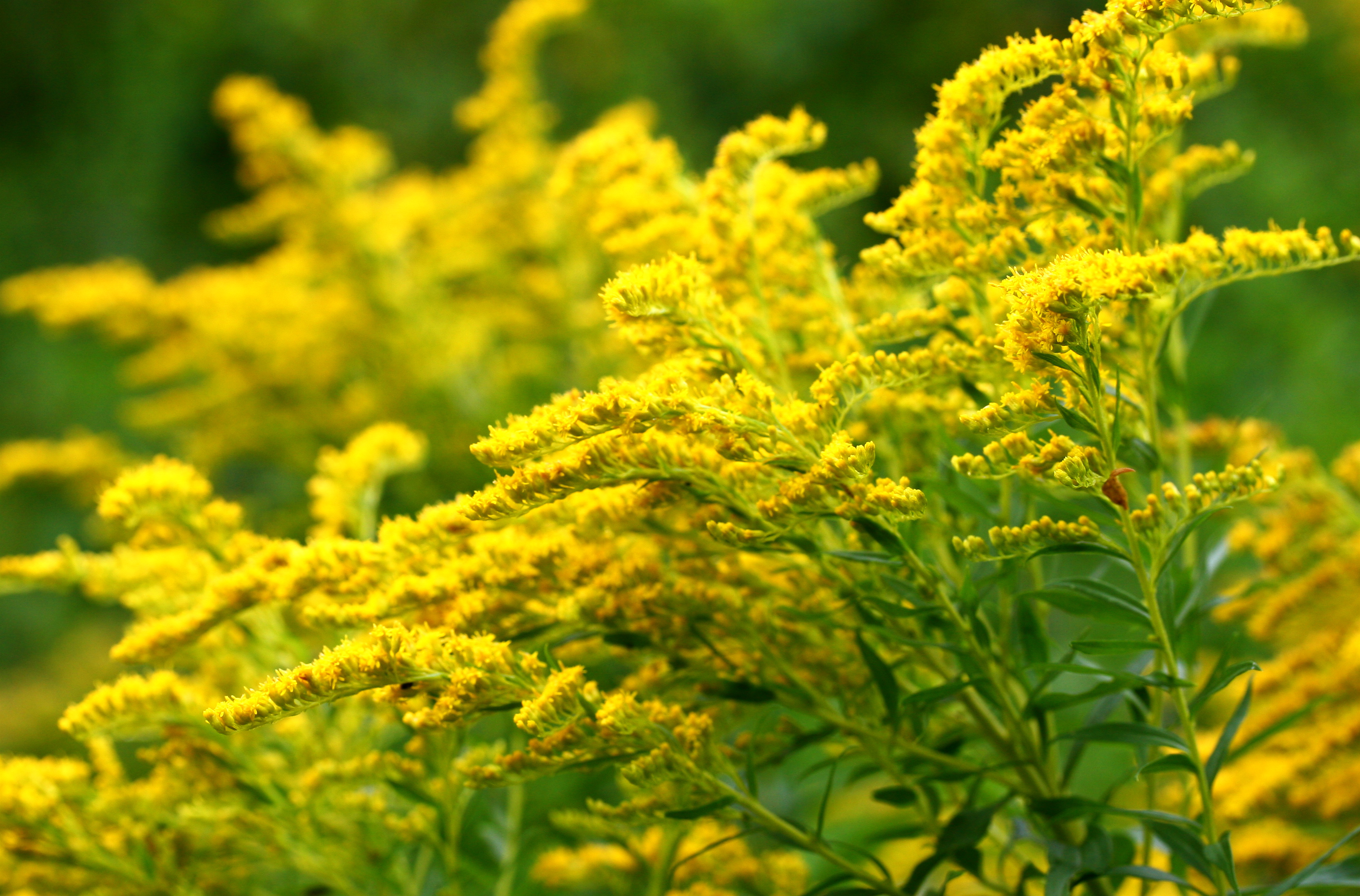 Ragweed
Ragweeds are members of the Asteraceae family, the family of plants with composite flowers (many teeny flowers that look like one big flower) like daisies and sunflowers. There are at least forty species of ragweed mostly native to North America, but here in PA, our notorious allergy offender is the common ragweed, Ambrosia artemisiifolia. The common ragweed can survive in a wide range of soil conditions, but it does prefer full sun. It also is allelopathic, meaning it produces chemicals that can discourage the growth of other plants around it. These aren’t known for their showy blooms, but I wanted to highlight them as a common fall allergen, since we often are more likely to blame goldenrod or other more noticeable flowers. 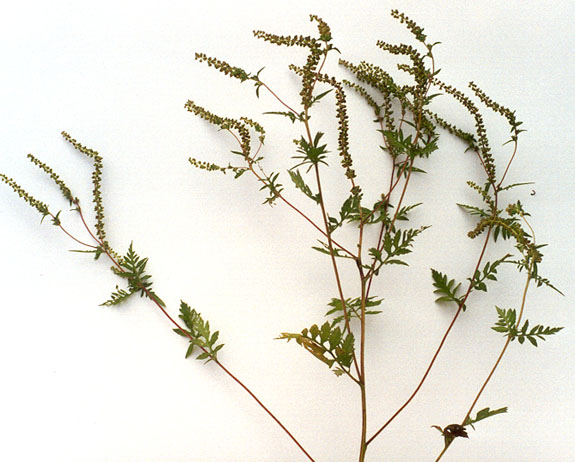 Late Boneset
Late boneset (Eupatorium serotinum), also known as late thoroughwort, is another fall-blooming aster that you have probably already seen this year along roadsides or perhaps meadows or pastures. Their tiny individual flowers are all disk florets; they don’t have ray florets like what appears to be the “petal” of a coneflower. 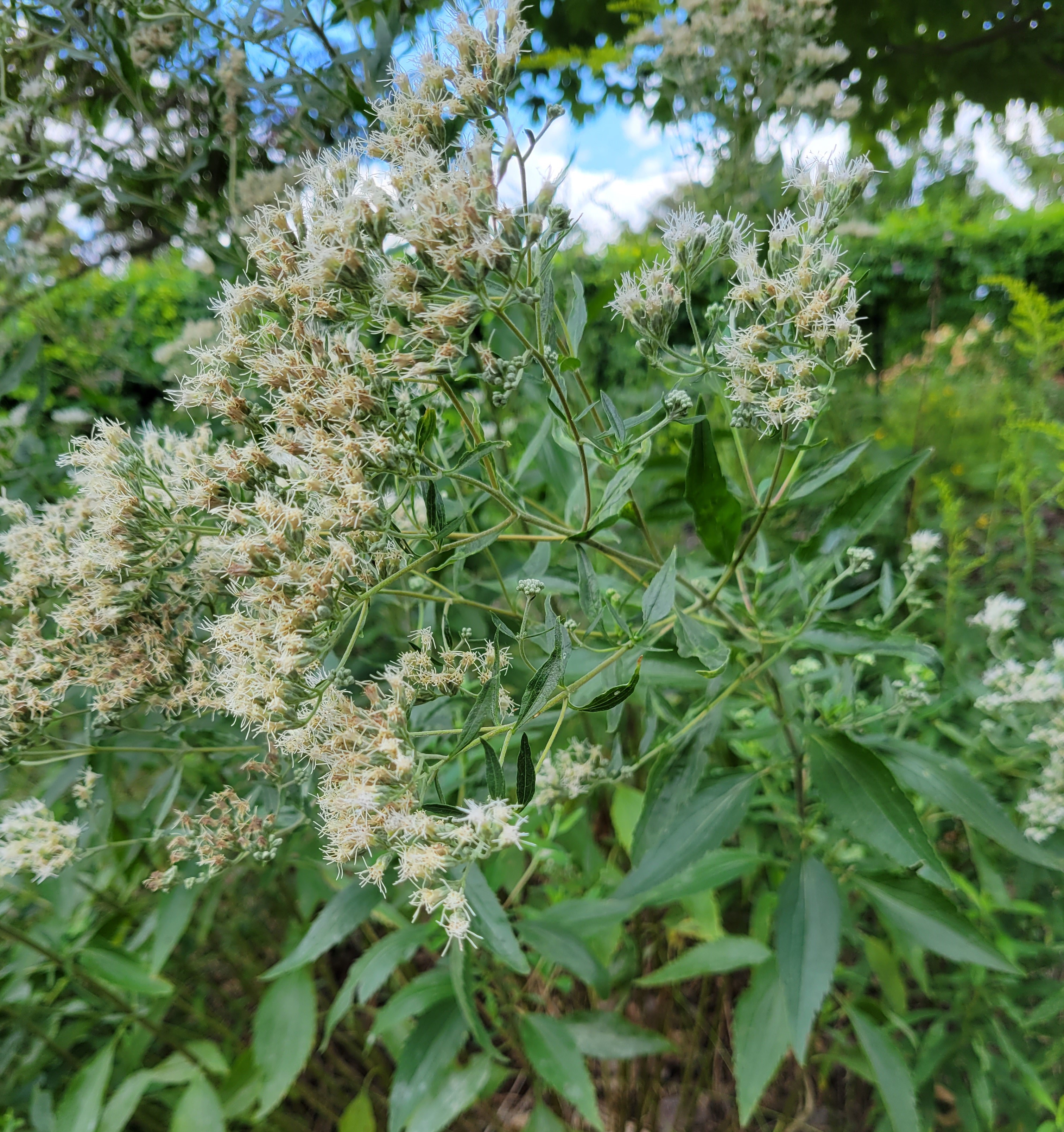 Partridge Pea
The partridge pea (Chamaecrista fasciculate), sometimes called the sleeping plant, is a showy little legume — meaning it is a member of the bean family Fabaceae. It blooms from roughly July until October, which is part of what makes it attractive to a wide variety of pollinators, including bees and ants.  This plant is 1–2 feet tall, and its leaves are quite sensitive to touch — possibly even dying and falling off if handled! The plant in general, though, is seen as both useful for erosion control, especially on hillsides, and as a showy, native ornamental. 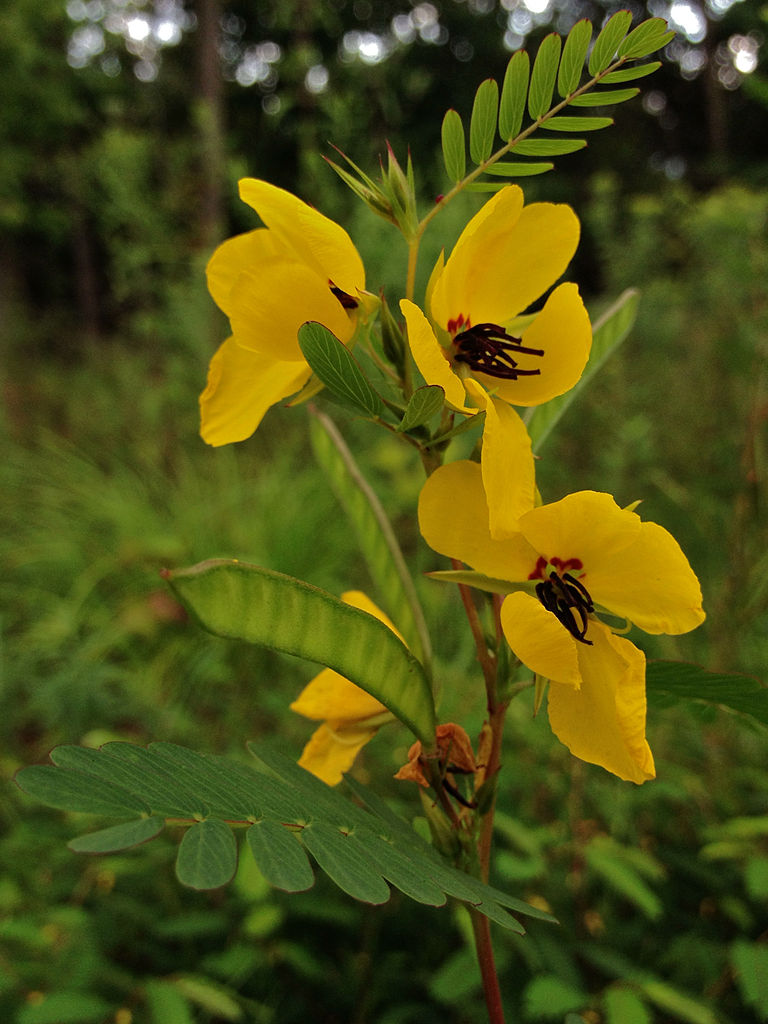 White Snakeroot
White snakeroot (Ageratina altissima) is also a member of the Asteraceae family. Like late boneset, white snakeroots don’t have ray florets, just disk florets. As the season progresses, the little white flowers will appear more “fluffy” late in the bloom, but each teeny bit of fluff is actually an achene, the same kind of dry, fluffy seeds as a dandelion. The flowers may look similar to late bonesets, but two plants can be easily distinguished by their leaves and, to some extent, height. Snakeroot’s leaves are shaped like long, rounded triangles while bonesets have distinctly elongated leaves. There is some overlap in height, but late boneset can grow 3-6 feet tall while white snakeroot tends to be 2-4 feet tall. 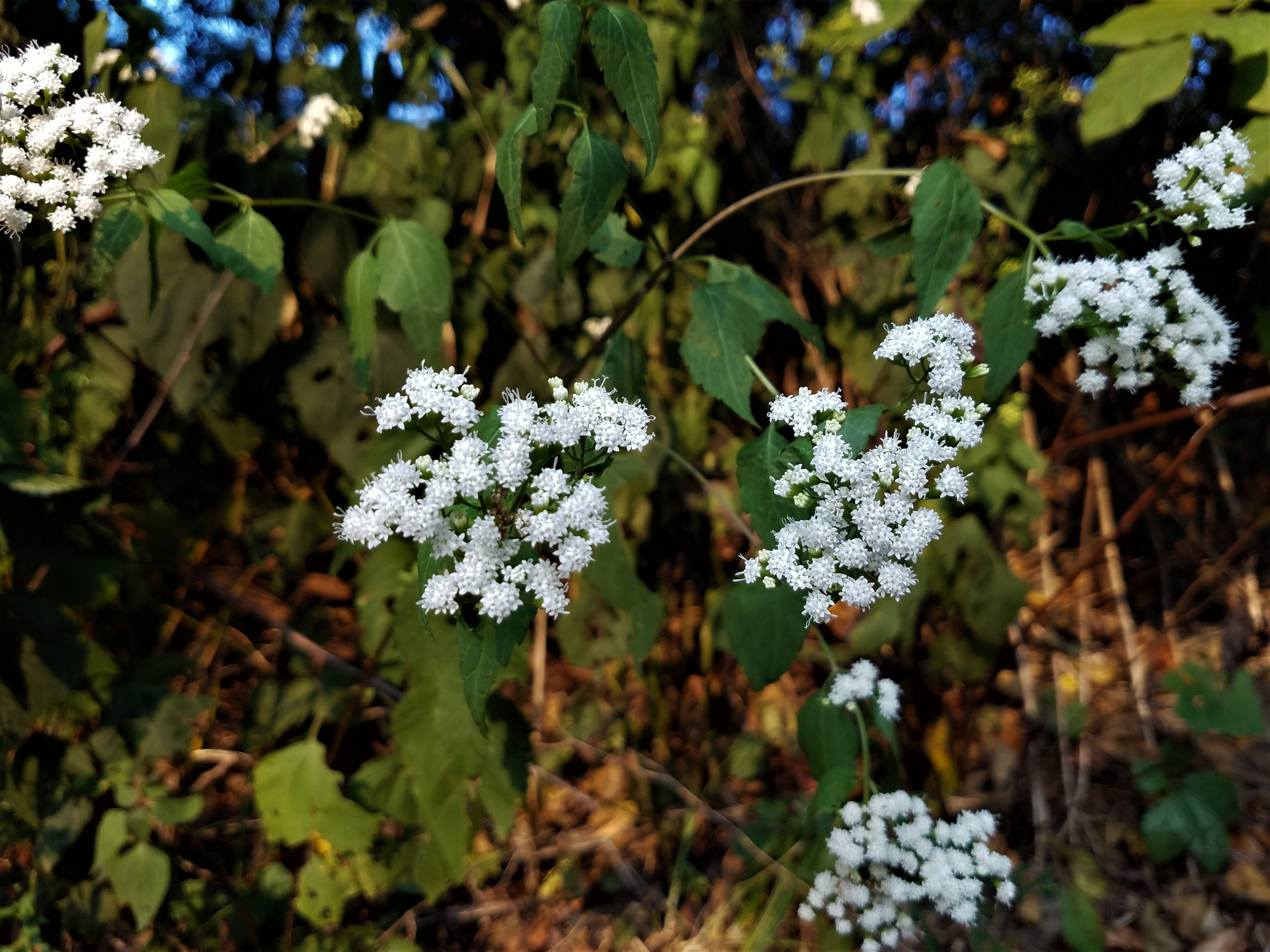 Connecting to the Outdoors Tip: Check our some of the late summer blooms, and perhaps visit a new hiking area while you're at it! If you're used to the trails of the county parks, perhaps try one of the properties from either Hollow Oak Land Trust or Allegheny Land Trust, or investigate a new state park!

Oh thank you, Dr Wheeler-Dubas, for identifying the wildflower in my garden as white snakeroot.  When I googled to find a september wildflower that looks for all the world like white joe-pye weed, all that ever came up was boneset.  But the leaves were all wrong.  It is so important to be able to name things.

I also have Partridge Pea in my garden! I learned a lot about plants varieties today. Thank you!

We have a lot of this because my grandmother enjoys collecting plants, orchids, and flowers, and the longer I live there, the more I realize the value of plants in the home. She is currently in <a href=“https://www.drywallmidland.com”>Midland.

We have a lot of this because my grandmother enjoys collecting plants, orchids, and flowers, and the longer I live there, the more I realize the value of plants in the home. She is currently in <a >Midland</a>.

This is a great blog. Thanks for sharing this wonderful content. | Concrete Companies Fort Wayne

These flowers are beautiful. I’d like to have these at my office when our Building Demolition is finish.

I like how you create this content in order for us viewers to appreciate it. These flowers are beautiful especially when placed at St Petersburg Epoxy Garage Floor. This would really attract visitors.

I wonder how my Epoxy Floor Installers see this one as an additional design to the place. Would be awesome.

I love this content and the flowers are really pleasant to the eyes. Most importantly the photographic expertise is superb!

Here at South Bend Concrete Contractors Co, we firmly believe that poor planning leads to equally poor performance. We believe that it takes more than industry-leading concrete work to set ourselves apart.

I’d like to know more about the author. I am an avid supporter of photography and garden. Wish we could work things out.

I’m interested in learning more about the author. I am a big fan of photography and gardening. I wish we could figure things out. www.drywallproscleveland.com