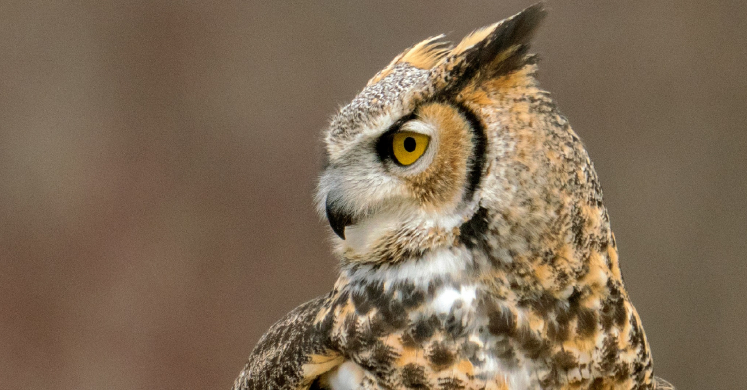 There it was! An owl call, and not just any call – a Great Horned Owl, the birds with the classic “who” call. We suspected the forested area at the edge of our neighborhood would be habitat for some sort of owl, and now we had finally heard this magnificent raptor!

Great horned owls may be at home here in Western Pennsylvania, but they can be found across North America in a variety of habitat types, partly because they are adaptable as predators. They “specialize” broadly on small mammals, but can also prey on other birds and occasionally reptiles or amphibians. On an entertaining note, they also lack a sense of smell, and they are quite efficient at preying on skunks.

Great horned owls, as well as owls in general, have a variety of adaptations that make them excellent predators. First of all, owls are nearly silent fliers. Most of us have heard the wing flaps of ducks or song birds as they take-off, but you won’t hear that from owls. This is possible for a few reasons: first, owl flight feathers have “serrated,” rather than straight, edges, which helps muffle the sound of feathers moving through air. Another adaptation for silent flight is their large wing size compared to their bodies. This allows owls to fly more slowly than other birds, which helps with silent flight.

Another owl superpower comes from the collective adaptations of their eyesight. Noticeably, owls have surprisingly large eye size relative to their skulls. To make a comparison: if our eyes were as large in our skulls as owl eyes are in their own skulls, we would have eyes the size of oranges! Large eyes allow owls to pick up any light in their dark, nocturnal environments. This advantage comes with a tradeoff, though. Owls actually don’t have round eyeballs the way we do. Rather, their eyes are more comparable to tubes with rounded lens, cornea, and iris in front. Also, owls lack the muscles to move those eyes within their orbitals (eye sockets). So while we can look to one side or the other without moving our heads, owls can’t do that. However, bird heads in general have a greater degree of rotation than us because they have more neck bones (also called cervical vertebrae) than we do. In fact most species of owls have twice the number of vertebrae in their necks that we do (14 versus our 7. Even giraffes only have those same 7 cervical vertebrae!) Owls cannot turn their heads all the way around though—that’s just a myth.

To watch this powerful predator in action, check out the video below!

Connecting to the Outdoors Tip: Great horned owls live all around the Pittsburgh area, but remember, your best bet is to hear one at night. Check out recent sightings on eBird, and be sure to listen quietly. Or, if you're family in search of learning adventures, check out the activity resources from the National Audubon Society!

Loved the article. I have recordings of what I learned through friends to be female and young Great Horned Owls shrieking for food. I was staying at a lodge near Cherry Springs for some Dark Skies photography of the Perseids meteor shower. The shrieking was coming from the forest around the lodge. The owners didn’t know what the sounds were, but they heard them almost every night. My friends are active birders and used BirdNet from Cornell Labs to help me identify my recordings. The App is only available for Android users right now, but will be coming out for IOS devices soon. Here is a link if you are interested: https://birdnet.cornell.edu/.

Thank you, Frank! And thank you for sharing a great resource!