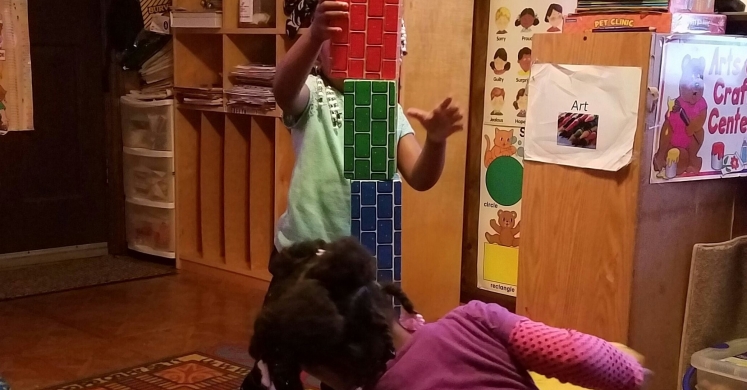 Play is the means through which experiences, behaviors, social and cultural expressions are merged and transformed into a practice that catalyzes self-interrogation and communal exploration (Janice E. Hale and Erika L. Bocknek). Yet, low-income Black children are disproportionately subjected to play-deprivation and denied their right to playtime due to racial and socioeconomic barriers. Play deprivation is the experience of being denied access to opportunities for myriad forms of play critical to holistic development (Elise Belknap and Richard Hazler). On a cultural and developmental level, depriving Black children of culturally responsive play experiences and/or criminalizing their play practices disconnects them from their ancestral and communal history as the deprivation resituates them between harmful tensions attached to their racial, gendered and classed identities.

Children develop conscious and unconscious racial perceptions of themselves and each other as early as infancy (Aisha White and Colleen Young). Therefore, addressing play deprivation is not merely about creating more opportunities to play; for Black children to grow emboldened in their racial and sociocultural identities, they must have reflective and responsive play opportunities. Culturally responsive play carries scripts and meanings that make play more meaningful and impactful for the children whose histories and experiences are reflected in the play. Black children possess forms of racial knowledge that is intentionally and unintentionally embedded in ordinary play and language. These forms of cultural and intergenerational knowledge enable Black children to identify and innovate methods of self-assertion and critical literacy in spaces that disallow them the liberty of self- definition. The ways in which play creates space for self-definition and/or self-valuation can be missed and/or the significance overlooked if our implicit biases go unchecked.

Play is a specific avenue through which all children have historically exercised and developed their own agency. Through the Black elementary school students with whom I play and conduct research, I witnessed them discover and create new forms of play that open them up to new ways of being - existing within their current circumstances, within their social networks, and within the larger world. While many adults have read their play forms as an indication of the poverty under which students are living, their play revealed how resistance can sometimes look like something or take some form we have been taught is negative (in my study, those forms reflect students’ exposure to drug dealing and negative hip-hop stereotypes). Rather than completely ruling out the influence of such stereotypes, I provide an alternative reading of their play as an informed play practice that invites a critical engagement with the institutions that undergird poverty and perpetuate racism.

In reading their play forms as merely racial and socioeconomic stereotypes, and/or disregarding their play as “wasteful,” “childish” and/or “ghetto,” it becomes easy to overlook and deny the presence of an interiority that is developed out of and responsive to the existential questions these children may be investigating, but not verbally articulating. In fact, if you look closely enough you will see that through play Black children may be telling stories of struggle, innovation and joy. I believe that analyzing such play practices and creating opportunities for culturally-responsive play is critical in the quest to identify and document Black children’s meaningful actions and powerful influence. Through play, Black children are reframing their stories, reclaiming their community and reconstituting conventional definitions of childhood. Ultimately, play provides a safe foundation for Black children to see, affirm and cultivate each other as they identify shared needs and invent solutions.

Ariana Brazier is a doctoral candidate at the University of Pittsburgh. Her research considers Black children, housing insecurity and play. She conducts in-field ethnographic research in Atlanta, Georgia with students and families at three of Atlanta’s most underprivileged schools. Ariana has instructed college composition courses rooted in social consciousness and community activism and focused on poverty and race. She was a teaching assistant for the Children & Culture course, which offers students knowledge about philosophical approaches to childhood from various fields, their social and cultural implications, and the cultural and political histories that engendered contemporary forms of childhood. Ariana is the co-founder of the nonprofit ATL Parent Like A Boss, Inc. which works to empower parents and their families by providing culturally responsive and tangible support as well as development opportunities for healthy community growth.

Thank you for this important and relevant article!

You are awesome, empowering and leading us well toward culturally grounded education!