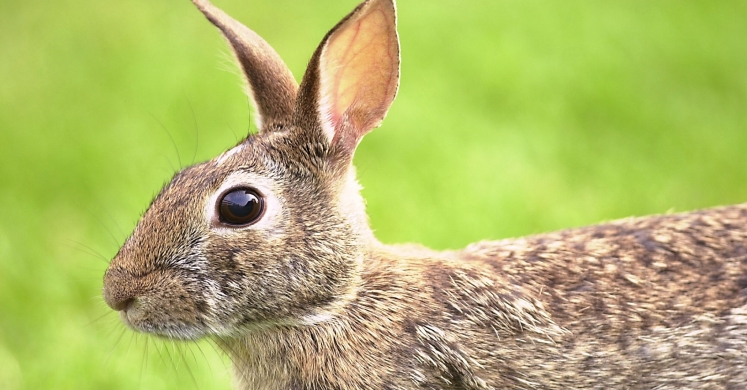 The leaves are turning, birds have begun making their way south, and the mammals who will hibernate have been fattening up before their long winter’s nap. Yet there is a little furry friend, with whom we are all quite familiar, who does not escape the cold, snowy months by either sleeping or traveling; and if you are in Western Pennsylvania, the odds are good that you have seen one these within the last week if not today: the eastern cottontail rabbit (Sylvilagus floridanus). On this blog, we often run into theme that the smallest or most unassuming creatures are often the mightiest in their own unique way, and rabbits are no different. Let’s explore!

As we already discussed, rabbits do not hibernate. That means these voracious little herbivores must keep up their near-constant eating even in the middle of winter when food is scarce (wildlife rehabbers describe rabbit metabolism as being 2-3 times faster than cats or dogs). They manage by finding herbaceous plant material under the snow, and even resorting to tree bark and sapling trees when they have to.

Rabbits seem like a ubiquitous suburban landscape feature, but they have simply adapted remarkably well to human presence. (Early in the summer, I shared that Phipps had been coordinating a camera trapping project with local schools, and every school we partnered with had rabbits on their property.) They are habitat selection generalists, which means they will use a variety of habitat spaces as home. Alongside our built environment, rabbits will move into burrows under just about any shrub, woodpile, or shed they can find; and suburban and urban habitats have the added benefit of fewer predators than rural or wooded areas. (Aside from house cats –please keep your cats indoors.)

Also, their reputation as rapid reproducers is absolutely accurate. Eastern cottontail rabbits only live a little over a year, but in that time, a female can raise 4-6 litters in her lifetime, and each litter can have up to five babies. Young rabbits tend to leave the nest when they are just under three weeks old, and they begin reproducing themselves when they are 2-3 months old.

What is absolutely fascinating about rabbits, though, is that they are in a group of animals called lagomorphs along with hares and pikas, and the distinguishing feature of this group are the four incisors from their upper jaw—the front two of which never stop growing. (You can see a picture of a rabbit skull with the teeth here.) Similarly, rodent incisors never stop growing, but lagomorphs have an extra set of teeth directly behind their primary incisors. These teeth help them bite tougher foods, but also keep in mind…anything with a mouth can bite.

Before we close today, there is one important misconception that I want to quickly chat about. During the spring and summer time, baby rabbits are quite commonly assumed to be orphaned when they are actually perfectly safe. The mothers don’t hover around the burrow to avoid attracting predators, but this often means that our best-intended efforts to protect baby rabbits ends up separating them. If you find rabbits you are concerned about, you can always call HAR in Verona, but avoid disturbing the babies first!

Connecting to the Outdoors Tip: You probably see rabbits on a regular basis, but the next time you spy one near home or work, take a few extra moments to note its coloration and markings. The next time you see a rabbit, is it the same one? You will probably have to spot the same individual a number of times before learning to tell them apart, but just the practice of watching wildlife lowers stress and can give you a moment of mindfulness in an otherwise busy day.

O’Connor 2015: Spatial and Temporal Use of Early Successional Habitat Patches by a Community of Mammals in the Northeastern United States

Humane Society: What to do About Wild Rabbits

Lincoln Park Zoo: What do Rabbits do in Winter?