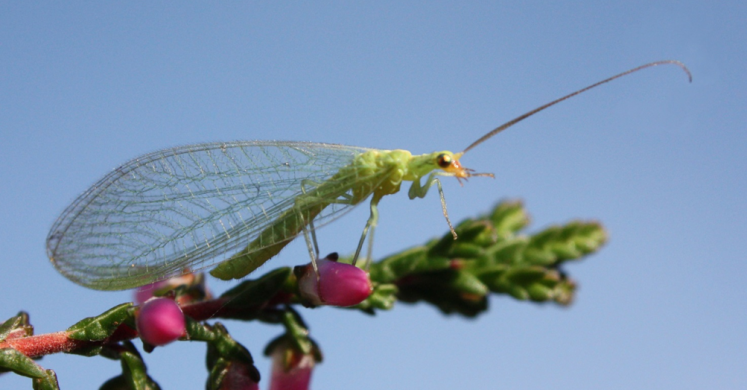 Getting to Know Beneficial Insects

Knowing and recognizing insects is an important step to expand gardening expertise.  Correctly identifying an insect help the gardener to decide if it is a good bug or a bad bug.  The majority of insects found are not harmful, but it’s important to take note when the occasional pest finds its way to your garden.  Proper identification is important to maintain a good predator-prey population ratio and to avoid killing a beneficial.

Green lacewings are another common insect that is generally seen around house lights at night.  This is due to lacewings being crepuscular or nocturnal.  These insects obtain their name from the delicate, lace like wings that rest on their abdomen.   As larvae, green lacewings are voracious predators, feeding on all sorts of insects for 1-3 weeks before pupating and becoming an adult.  Plants that help lure these marvelous creatures to your garden include plants in the Apiaceae family such as dill (Anethum), and those in the Asteraceae family such as  sunflowers (Helianthus), and Coreopsis.

Whirligig mites are quite common and move with notable quickness in tiny small circles, which is where the common name is derived from.  These mites are predatory and help to control small arthropods which include spider mites, aphids, and other insect pests.  They can be found on common garden plants such as Duranta, and can generally be found scattering about through leaf litter and foliage.

Ladybeetles are a familiar sight and are one of the few insects that are commonly viewed as a favorable insect to have around.  Morphological aspects of ladybeetles can vary in color, spot location and quantity.  The larvae parallel the aggression and mobility of lacewing larvae, feasting on small bodied arthropods viewed as pests that can affect plant vigor and aesthetic value.  Companion plants that can serve as an attractant to ladybeetles include marigold, Queen Anne’s lace, dill, and alyssum.

Jumping spiders, although not insects, are often found on a warm summer days moving about in broad view in sunlit areas.  They are active day hunters, using silk as a means of a tether, securing themselves before leaping for prey or simply moving amongst foliage.  Their vision is unparalleled when compared to other spiders, and they use it to their advantage to seek prey or mating partners, as opposed to using intricate webbing.  Friendly to people, you can often observe them up close carefully taking in its surrounding, giving a sense of an anthropomorphic spider.