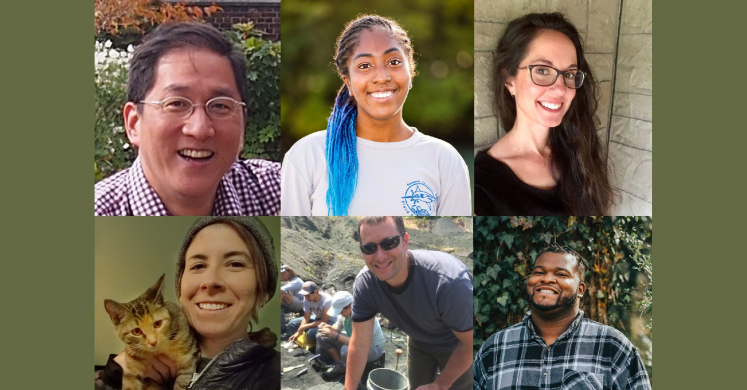 There are so many possibilities in the world of science! To take a closer look at what it means to go into science as a career, join us for SciTalk, a three-part series of virtual meet-ups to give high school sutdents the chance to meet scientists from different fields to talk about research, career paths and just what life is like as a scientist. Each class date will feature two different researchers, hosted by Phipps’ science education outreach manager Dr. Maria Wheeler-Dubas. Read about our guest scientists below, and check out the class page for more details and to register!

July 14 – Drs. Mary Janecka and Matthew C. Lamanna
Dr. Mary Janecka
Hi!  I started working hands-on with wildlife and conservation as a Park Ranger and Endangered Species Biologist for federal agencies and non-profit organizations.  In these positions I was lucky enough to get to do things like trap black-footed ferrets and badgers and catch and band birds across the southern US.  I decided to become a scientist to help other wildlife biologists make researched-based conservation decisions.   I now combine my intellectual curiosity about parasites with my passion for conservation biology and field work to address host-parasite ecology, transmission dynamics, and applied conservation.  In my research, I catch venomous and non-venomous snakes in Texas rivers and swamps and fish in the mountain streams of Trinidad and Tobago to understand how hosts, parasites and the landscape interact to effect parasite transmission and conservation genetics.

Dr. Matthew C. Lamanna
Matt Lamanna is the Mary R. Dawson Associate Curator and Head of Vertebrate Paleontology and the principal dinosaur researcher at Carnegie Museum of Natural History in Pittsburgh. He received his B.Sc. from Hobart College in 1997 and his M.Sc. and Ph.D. from the University of Pennsylvania in 1999 and 2004. Within the past two decades, he has directed or co-directed field expeditions to Antarctica, Argentina, Australia, China, Croatia, Egypt, and Greenland that have resulted in the discovery of multiple new species of dinosaurs and other fossil animals from the Cretaceous Period, the third and final time period of the Age of Dinosaurs. Indeed, Lamanna is one of the very few people in history to have found dinosaur fossils on all seven continents. He and colleagues’ most significant discoveries include the gigantic titanosaurian sauropods (long-necked plant-eating dinosaurs) Dreadnoughtus, Notocolossus, and Paralititan. Lamanna also led the study of the bizarre bird-like dinosaur Anzu, better known as the ‘Chicken from Hell,’ and co-discovered dozens of beautifully preserved fossils of the ~120-million-year-old bird Gansus in China. More recently, he and collaborators named Sarmientosaurus, a titanosaur that is represented by the best-preserved skull yet discovered for this diverse and abundant dinosaur group, and Mansourasaurus, a titanosaur that fills a ~30 million-year gap in the fossil record of dinosaurs on the African continent. Much of Lamanna’s most recent research centers on megaraptorids, a mysterious group of large-clawed predatory dinosaurs from the Southern Hemisphere landmasses. Lamanna served as chief scientific advisor to Carnegie Museum of Natural History’s $36M dinosaur exhibition, Dinosaurs in Their Time, and has appeared on television programs for PBS (NOVA), the Discovery Channel, the History Channel, A&E, the Science Channel, and more.

July 21 – Carlee Jackson and Molly Moore
Carlee Jackson, M.S.
Carlee Jackson is a shark and sea turtle conservationist. She researches how different human activities affect shark behavior, and helps protect sea turtle nests along Florida’s beaches. Carlee is a member of the American Elasmobranch Society, and has served on the advisory board for the SEE Turtle Inclusivity Fund. Currently, Carlee is a Sea Turtle Research Associate with New College of Florida, based at Walt Disney World. She works with the Disney Conservation team, assisting with research for their marine conservation program. Carlee is also a co-founder and the Director of Communications for Minorities in Shark Sciences (MISS), an organization committed to promoting diversity and inclusion in shark sciences. She is passionate about effectively communicating marine science topics to a variety of audiences, especially underrepresented communities. Originally from Detroit, MI, Carlee received her B.S. in Biology from Florida Atlantic University, and her M.S. in Marine Biology from Nova Southeastern University.

July 28 – Dr. Tae Min Hong and Alex Troutman
Dr. Tae Min Hong
Hi! I’m an experimental elementary particle physicist doing research with data from the Large Hadron Collider. As a kid, I loved the big philosophical questions about Nature, but I’ve always been a tinkerer. My first research project in high school, in the suburbs of Los Angeles, was the Scrambler to transport an egg, which I made with material from Home Depot. I got in to a research group my first semester in college, and many years later, now, at the University of Pittsburgh, I have my own research group designing AI algorithms for custom electronics in an attempt to discover new fundamental laws of Nature.

Alex Troutman
Alex Troutman is Wildlife Biologist and Environmental educator with a passion for sharing and immersing the younger generation into nature. He has a Bachelor’s Degree from Georgia Southern University (GSU)(2014) and is currently pursuing a Master’s Degree in Conservation Biology from GSU. Knowing what it feels like to not see anybody who looks like you doing the things you enjoy, Alex makes it a point to be that representation for the younger generation.  Alex is the co-Organizer for several Black in X weeks including: Black Birders Week, Black Mammologists week, and Black in Marine Science weeks – a movement encouraging diversity in nature, celebration of Black individuals scientists, and increasing awareness of Black nature enthusiasts, and diversity in STEM fields.