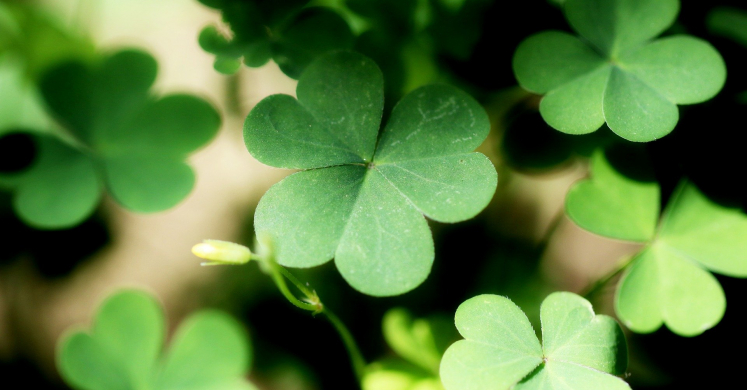 Shamrocks are a symbol of Ireland and, of course, St. Patrick’s Day! The word “Shamrock” comes from the Irish word seamrog meaning “little clover” or “summer flower.”  The funny thing about shamrocks is that they are an idea of what a plant looks like. There is no species of plant called shamrock! There is a lot of debate over what a “true” shamrock is. Shamrocks are known to be green, have three leaf-lets (not true leaves!), and grow low to the ground. There are a number of plants that fit this description. So in the late 1800s, botanists performed several surveys of plants that could be considered shamrocks to see what most Irish people believe to be the “true shamrocks.” Let’s see what you think!

This survey has been repeated several times throughout history, baring very similar results. Most American people say that “common wood sorrel” is the true shamrock. Most Irish people say “yellow clover” is the true shamrock. Since Ireland was the nation that coined the term shamrock, that is what much of the world agrees with. Shamrocks were first described in the 1500s as what we call “white clover,” making it the original shamrock.

So what about Lucky Four-Leaf clovers?

Many people say that four-leaf clovers are good luck. While there are some shamrocks naturally grow with four leaflets, such as wood sorrel (Oxalis acetosella), what people often find are white clovers with a mutation. This mutation can be genetic or caused by environmental factors. Only about 1 in 10,000 clovers are four-leaf clovers. That being said, one clover is actually part of a much bigger white clover plant that spreads a few inches to a few feet. All of those clovers are connected by roots. So if one of the clovers has a mutation, other clovers nearby are more likely to have it too. So if someone else finds a four-leaf clover, you can go look near where they found it, and you may be able to find a four-leaf clover, too!

The best way to find a four-leaf clover is not to sit down close to them, but actually to look at the patch of clovers standing up. Scan the clovers with your eyes and look for a change in the pattern of 3 leaves, rather than specifically a 4 leaf clover. Your eyes will pick up a change in the pattern more readily. You can train your eyes to notice these changes in patterns and suddenly you’ll begin seeing 4-leaf clovers everywhere!

You may even be able to find a clover with more than four leaves! Some clovers can have 5 leaves, 6 leaves, 10 leaves, even more! I, myself, have found several 5 and 6 leaf clovers, and once I even found a 7 leaf clover. According to the Guinness Book of World Records, the record holder was a 56-leaf clover! It was found in Japan by a man named Shigeo Obara. Mr. Obara studies clovers and held the previous record for a clover with the most leaflets. You can see his amazing clover here.

A student Minori Mori from Japan did an experiment to see if she could grow 4 leaf clovers. She gave some of the clovers double the phosphate that they normally need, which led to double the percentage of four-leaf clovers. She added auxin to the water of some of the clovers with double phosphate, which made the clovers grow more than 4 leaves. Some grew 5, 6, 7, and even 8 leaves! To read more about her experiment, check out her feature in Science News for Students.

To learn more about the history of shamrocks and the methods behind finding four-leaf clovers, check out some the resources below. And have a lucky day!

Smithsonian Magazine: No One Really Knows What a Shamrock Is

Smithsonian Magazine: How to Find a Four-Leaf Clover