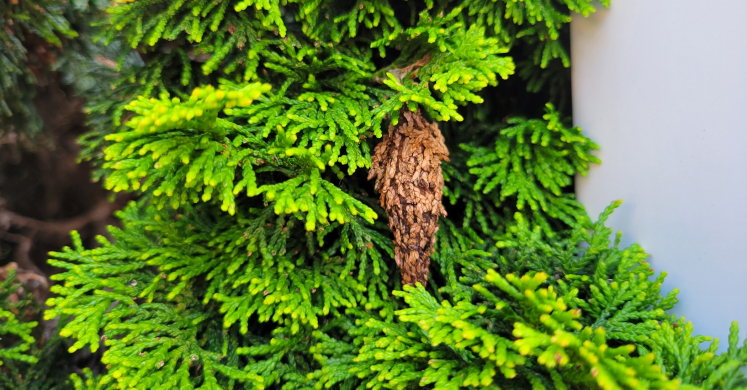 Over the weekend, I spied an intriguing little structure on the edge of my decorative autumn flag in front of my landscaping. It was cocoon-like and seemed to be covered in dried bits of evergreen foliage. 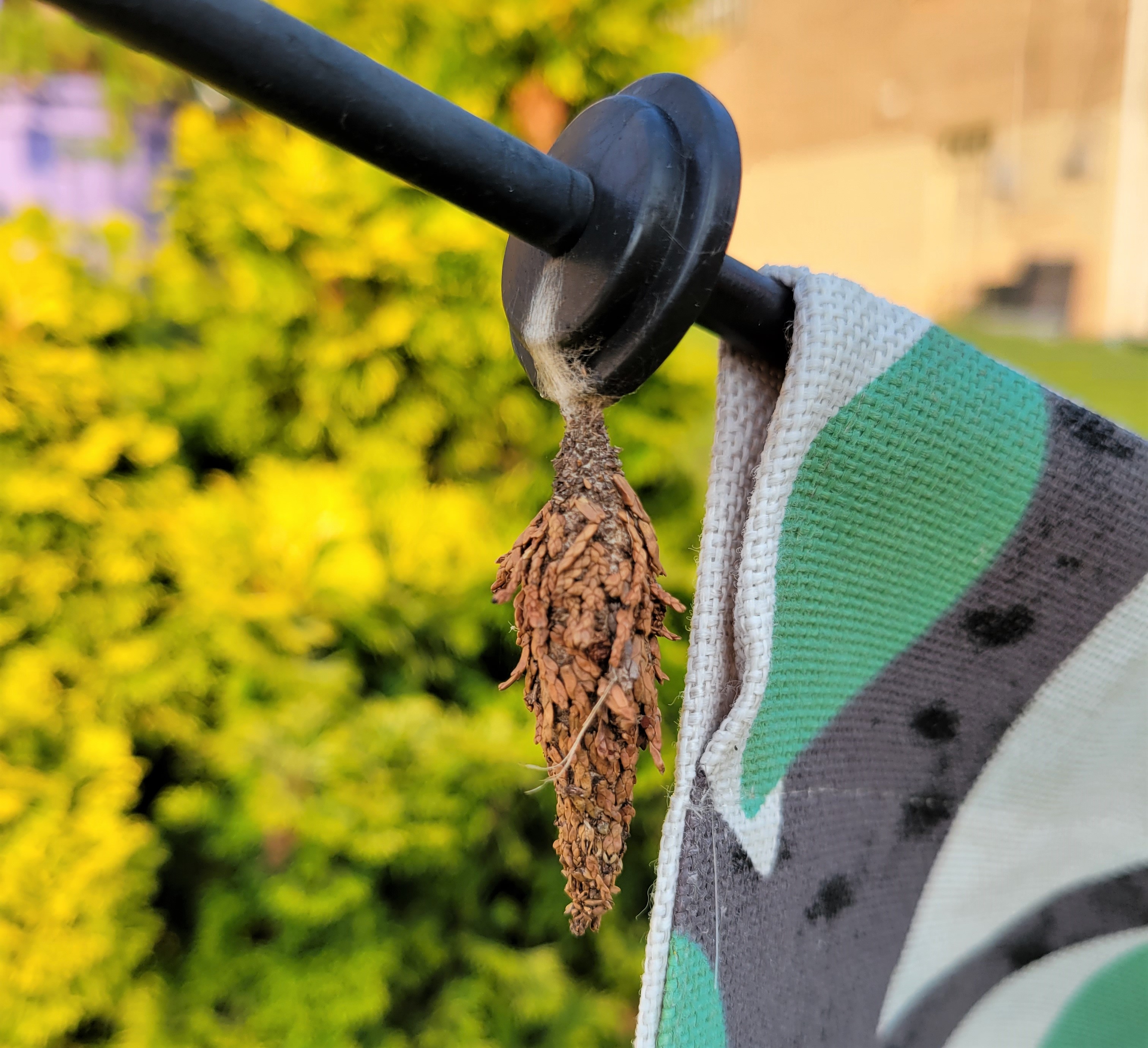 After a few moments of investigating, I discovered roughly twenty of these little structures on one of my shrubs and the porch railing just next to it! I had quite a few bagworms, it turned out! Aside from the name, though, I didn’t know much else about these insects, so I checked in with Braley Burke, Phipps’ integrative pest management specialist. Let’s learn about this “pest,” shall we?

There are a number of different species of bagworm out there, and this one seemed most likely to be Thyridopteryx ephemeraeformis. Bagworms are actually moths, but they spend the majority of their life cycles in cases exactly like the ones I found.

“Males emerge from their cases around this time of year,” Braley explained. “They emerge in late August or early September, and really, they just find a mate and then they die.”

And as adults, females never even emerge from their cases! The males find a case with a female inside, and after mating and egg laying, adults die and the eggs will spend the winter in their mother’s case (the females “mummify” inside their cases after laying eggs.)

“The next generation emerges from their mother’s case in the spring, in late May or early June,” said Braley. “And they will begin eating and constructing their own cases out of silk and plant debris. Once they have entered those new cases, the females never emerge, and the males only emerge to mate.”

Quite a life cycle, but both males and females are well-adapted for a life like this. As adults, the females have no eyes, mouthparts, or wings, and they attract males to their cases by emitting pheromones. Males, on the other hand, do emerge with the typical structures we would expect to find on a moth (wings, antennae, eyes, etc). Their wings are clear rather than the opaque feathery scales of most of their relatives. 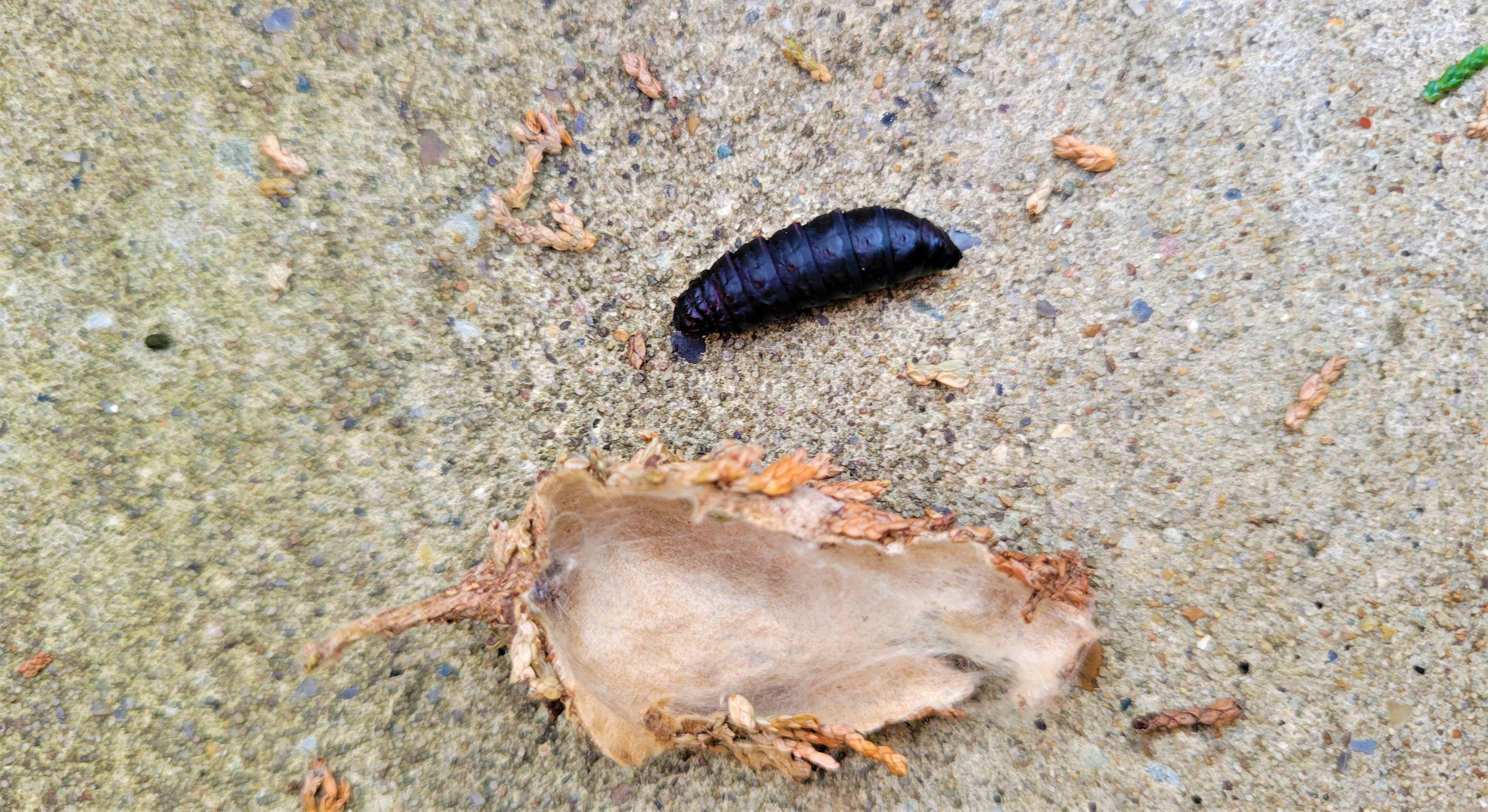 Though I was fascinated by these cases, I was a little worried for my shrubs that I found them in. In high enough numbers, bagworms can damage or even kill their host plants, which typically include evergreen species like arbor vitae, juniper, pine, and spruce. Luckily, that’s not usually a large concern.

“If it’s not a heavy infestation, management is pretty easy – you just pick off the bags and they probably won’t come back.” Notes Braley. “Do be sure to throw them in the garbage and get them off the property, or they will just emerge. Heavier infestations may require a more multipronged approach, but bagworms generally only create aesthetic issues and usually won’t kill the plant.”

Well, that certainly is a different little creature, but Braley and I had a chance to muse about the life cycles of different insects…and it’s truly wondrous how different life can look for other living things. Periodical cicadas can spend up to seventeen years underground, only to emerge and live a short life of a few weeks on the surface before, again, mating and dying. If you were near the Point or some of the riverfront trails in early July, you may have seen the mass emergence of adult mayflies; they spend at most a few weeks on land as adults after spending 1-2 years in an aquatic stage of life. Nature just has so much creativity in life – if you have chance, be sure to get outdoors sometime soon to enjoy it!