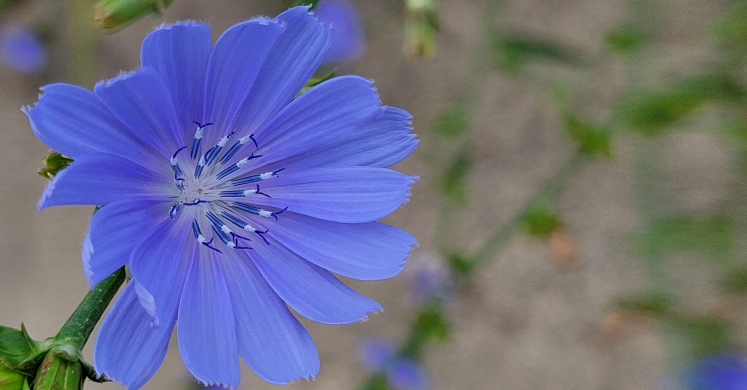 #bioPGH Blog: Chicory, Dickory, Dock – The Flowers are on the Clock

Chicory, dickory, dock.
These flowers are on the clock
In mornings, they’re blue
By midday, they’re through,
Keeping transpiration on lock.

During high summer, have you ever noticed that chicory flowers are so beautiful, blue, and vibrant…but mainly in the morning? A notable feature of chicory is the opening and closing of their short-lived flowers. I took the photos of the same plant below at my house – one around 7:45 in the morning and the other a little after noon. In the morning, the flowers were in full bloom, but by midday day, the blooms were already done.

Though we may often take flowering for granted, a plant’s flowering time and flowering duration are based on a complex combination of factors such as the energetic demands to create a flower in the first place and the need for pollination. Beyond that, the duration of daily and seasonal bloom time is influenced by how available pollinators usually are, what time those pollinators are usually active (e.g. day or night, morning or midday), what resources go into each flower, and how long per day is the flower open. Chicory produce flowers all summer — from shortly after spring’s last frost all the way until autumn’s first frost. But throughout those seasons, they reserve daily bloom time for when their pollinators are the most active and they risk the fewest resource losses, like florivory (flowers being eaten) and water loss through their flowers. Thus, in the summer time, chicory are most likely to bloom in the morning and end flowering by midday. This protects the plant from water loss while still giving it time to be pollinated. And on cooler or overcast days, chicory may stay in bloom throughout the day.

Outside of their unique flowering strategy, chicory are notable for being a non-native plant that was brought to the US by colonizers because virtually every part of the plant historically has a use. Different parts of chicory are used in traditional medicines, teas, as an additive to coffee, and even as salad greens. Chicory is even used agriculturally as a fodder crop to help maintain soil quality while livestock such as dairy cows graze. Chicory are also members of the Asteraceae family, meaning they have the same inflorescence “flower” that is actually made up of ray florets and disk florets like other aster family members like sunflowers, coneflowers, and dandelions.

So if you’re out and about some morning, keep an eye out for a pop of blue! If you happen to pass by the same spot later on a hot day, take note of whether or not the flowers remain. The plant is probably keeping itself water-safe!

Neat! I always assumed it had just one flower not the florets- I definitely learned something. And love the poem haha!