Imagine walking a wooded path on a dark evening. You can hear the orchestra of the outdoors: buzzing insects, falling water, perhaps the occasional distant call of a treefrog. But then…you hear something else…an eerie, ghostly sound.

Though it’s not quite a screech, that is the call of the Eastern Screech Owl!

The Eastern Screech Owl is a year-round resident in most of the eastern US and a good part of the Midwest. If you have gone for a night hike in Pennsylvania, you have probably at least heard their call. With their camouflaged coloration, either a rusty “rufous” color or a gray morph, they can be difficult to spot, especially since they are only 7-10 inches tall. Don’t let their diminutive stature fool you, though! They are small but mighty hunters. Screech owls prey on worms, insects, and crayfish, but also excel at catching small mammals such as mice, rats, moles, and squirrels. They even occasionally catch small birds and bats. 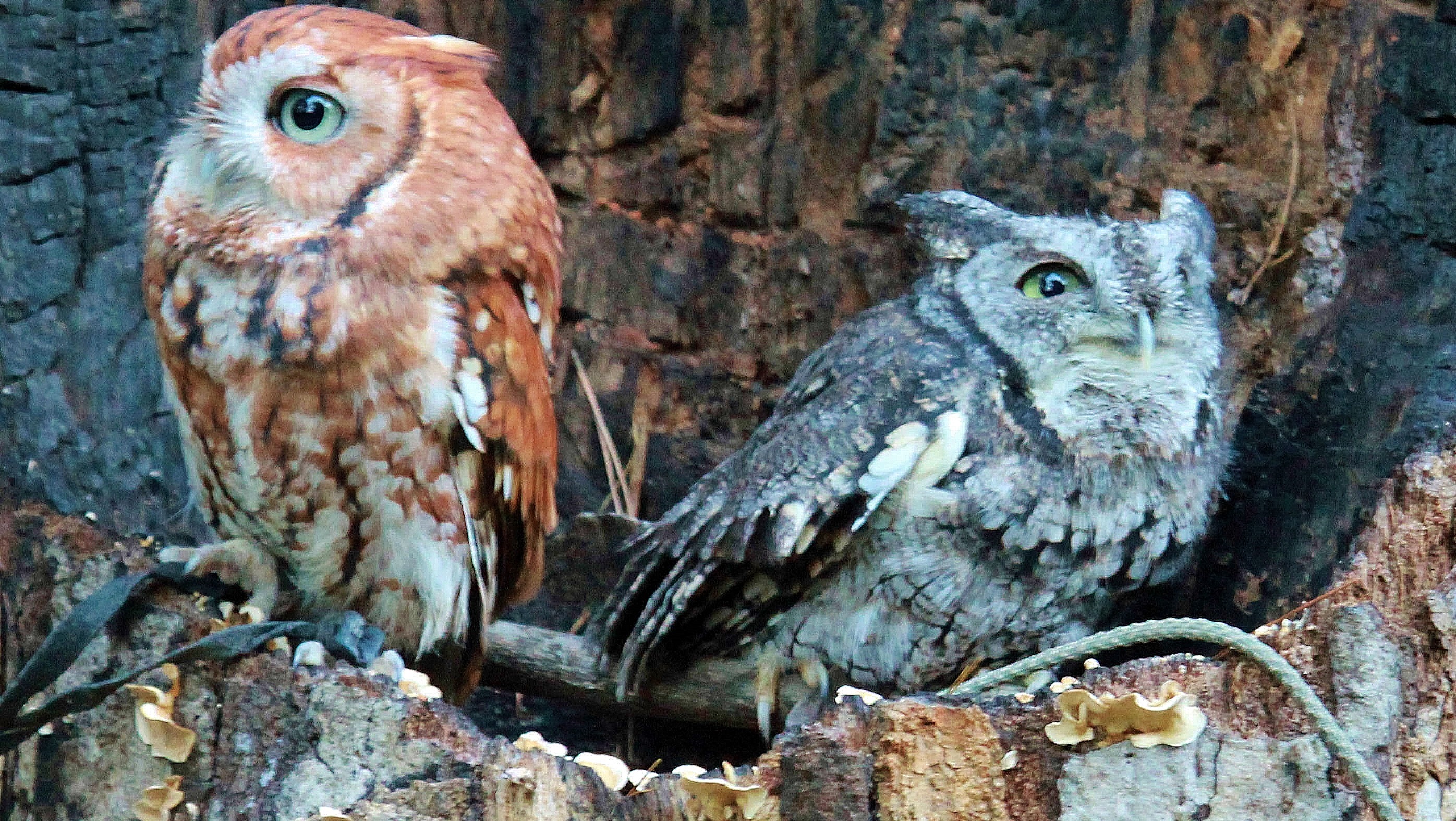 Screech owls are effective predators because of some special adaptations that many owl species share. First of all, owls are nearly silent fliers. Most of us have heard the wing flaps of ducks or song birds as they take-off, but you won’t hear that from owls. This is possible for a few reasons: first, owl flight feathers have “serrated,” rather than straight, edges, which helps muffle the sound of feathers moving through air. Another adaptation for silent flight is their large wing size compared to their bodies. This allows owls to fly more slowly than other birds, which allows for silent flight.

Another owl adaptation is their surprisingly large eye size relative to their skulls. To make a comparison: if our eyes were as large in our skulls as owl eyes are in their own skulls, we would have eyes the size of oranges! Large eyes allow owls to pick up any light in their dark, nocturnal environments. This advantage comes with a tradeoff, though. Owls actually don’t have round eyeballs the way we do. Rather, their eyes are more comparable to tubes with rounded lens, cornea, and iris in front. Also, owls lack the muscles to move those eyes within their orbitals (eye sockets). So while we can look to one side or the other without moving our heads, owls can’t do that. However, bird heads in general have a greater degree of rotation than us because they have more neck bones (also called cervical vertebrae) than we do. In fact most species of owls have twice the number of vertebrae in their necks that we do (14 versus our 7. Even giraffes only have those same 7 cervical vertebrae!) Owls cannot turn their heads all the way around though—that’s just a myth.

If you’re lucky enough to catch a glimpse or hear one of these little ghosts of the forest, don’t forget all of the wild adaptations in such a tiny bird. Nature always leaves us with more to explore!

Connecting to the Outdoors Tip: Allegheny County Parks offer guided walks and events focused on owls at different times of the year. Check out their calendar of events to find out more details.