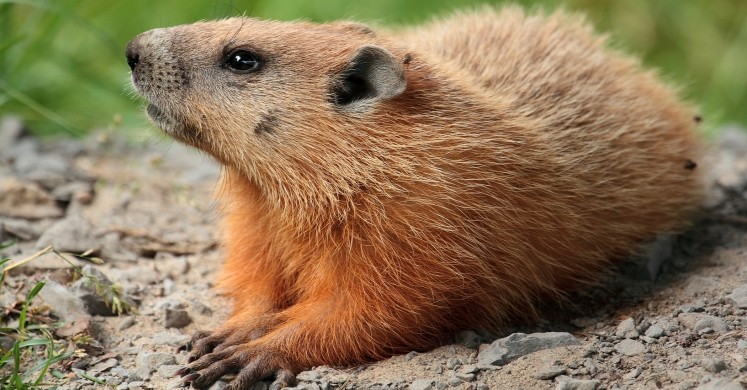 #bioPGH Blog: Groundhogs – Neither Hogs nor Always on the Ground

We had quite a snowfall this morning, but I seem to recall that a furry little someone didn’t see his shadow this past Sunday, which is supposed to mean an early spring. Well, I’m not sure how much power groundhogs actually have to determine upcoming weather, but they are plenty fascinating even without the storied meteorological clairvoyance. Let’s learn a bit more about these roly-poly rodents, shall we!

Groundhogs (Marmota monax), also sometimes called woodchucks or whistle pigs, are rodents common across the eastern half of the US and nearly all but the northernmost parts of Canada. They are primarily herbivores, but they have been known to eat insects or on very rare occasions small mammals or bird eggs. Though they average about 13 pounds in weight, groundhog weight fluctuates over the year. They tend to eat as much as possible during warmer months to fatten up before hibernating. Also, if you’ve ever noticed their large front teeth, it makes sense that groundhogs are rodents. They have the classic rodent incisors that never stop growing.

As a many a gardener knows, groundhogs are burrowers who have adapted very well to the presence of humans. They dig their own burrows that they use for sleeping, hibernating, and raising young; but since they are voracious eaters, they also spend a good deal of time above ground foraging. Interestingly, though home range size for urban groundhogs is only 10% of the size their rural/woodland counterparts, urban groundhogs have a much higher annual survival rate because they are less likely to be eaten by predators and they are less likely succumb to starvation during hibernation (oh the garden woes…our flowers and crops do help fatten them up!) And though groundhogs prefer a home below the ground, they are surprisingly agile climbers and can escape predators and find food by climbing trees, woody shrubs, and some fences. They actually are in the same mammalian family as squirrels, Sciuridae—so maybe that makes sense!

As fascinating as these chunky yet agile little critters may be, if you do find that groundhogs are seriously impacting your gardening, you have a few options according to our Homegrown staff. The first is planting a “trap crop”—basically, plants for the groundhogs to eat so that they will stay away from the plants you don’t want them to eat. For this to be effective, plant the “trap crops” like clover and alfalfa near the groundhog’s entrance to the garden. Next, you could try live-trapping, which is tricky, and you would want to make sure that you are following local laws and safety guidelines. The third option is to build tall mesh fencing around your garden area while also protecting the perimeter of the garden with fencing that goes underground. Reach out to Ask Dr. Phipps if you’d like to chat about these options!

So even though you probably shouldn’t make travel plans based on a groundhog’s weather prediction, our furry friends really are fascinating. And you have a pretty good chance of seeing one when you get outdoors and look around, even in urban settings!

Connecting to the Outdoors Tips: We see groundhogs pretty frequently, but let's try a little longterm experiement. When you see your first few groundhog of the spring, take pictures! Later in the summer, try photodocumenting a few more. Then in late summer or early fall, try to take a few more pictures. Then compare picture from thoughout the year to note the groundhogs' annual change in size. (Note: to make it a proper experiment, plan out a hypothesis first and predict what you expect to see! If you don't see what you expected, talk about why. Did you see the same groundhog every time? Were you in greener areas for some pictures than others?)