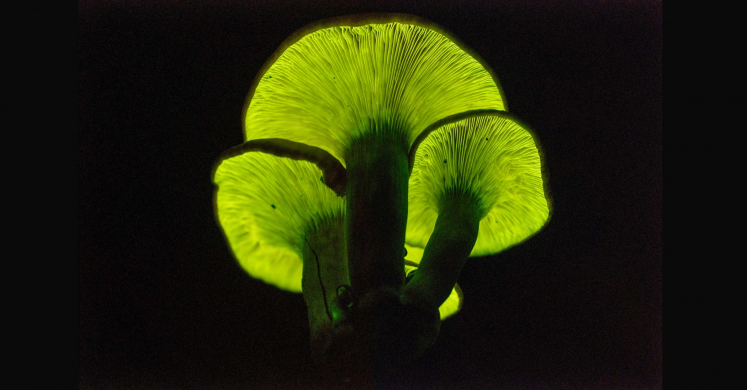 October is the spooky season, and few things can make a forest traveler tremble like something glowing in the woods. A few years ago, we looked at the legendary will-o‘-the-wisps and their luring, leading lights; but what if something small and stationary was glowing — say, a mushroom? Why would a mushroom need to glow? Or what if the mushroom would glow under certain lighting, like black lights? Enquiring minds want to glow!

Let’s take a step back and talk about our fungal friends overall before we dive into the glowing aspect. We’ve all seen fungi in some form or another, though there is quite a bit of variation across this kingdom of life. Some fungi may look like plants, others look like slime or dust, and others may look bubbly, bumpy masses. Some fungi grow on the ground, others on trees, and some…on your feet! The mushrooms of a forest, though, are only the temporary fruiting body of a fungus; the rest of the organism lies underground or in rotting wood. This “hidden” portion of a fungus is a network of little filaments (threads) called mycelia (singular: mycelium). Though they may loosely resemble a thin webbing of plant roots, they have quite a different anatomy and function. Mycelia produce the fruiting bodies of fungi, what we often think of as mushrooms, like puffballs, but they also break down organic material and absorb the nutrients.

This function of mycelia hints at a major job of fungi in ecosystems: decomposition. Fungi break down organic matter — things that used to be alive. This is a key part of nutrient cycling, the process which allows other organisms to take advantage of the released nutrients from dead plant or animal material. Fungi accomplish this by producing enzymes, a special kind of protein that breaks down materials. Have you ever put meat tenderizer on a tough steak? That is a particular enzyme breaking down the tough protein in the meat.

With this all in mind, the questions then become: Who glows there? And why the need for a nightlight? Roughly 80 species of mushrooms around the globe are what’s called bioluminescent — they are a living thing that can chemically produce their own light. Mushrooms that glow actually accomplish their luminary feat in a very similar way as fireflies, by producing a luciferase enzyme that glows when activated. Research from just within the past ten years suggests that the glow attracts insects, who in turn help spread the mushroom’s spores after the visiting.

I asked the Western Pennsylvania Mushroom Club (WPMC) about any glowing mushrooms in our area:

“We have a number of bioluminescent fungi in the region,” said Richard Jacob, who coordinates the Club’s mushroom DNA barcoding program. “But they don't glow that brightly and you need a dark night and have your eyes well-adjusted to the light in order to find them.” These would include the Bitter Oyster (Panellus stipticus), Honey Mushroom (Armillaria mellea and Armillaria gallica), Bleeding Fairy Helmet (Mycena haematopus), and Jack-O'Lantern Mushroom (Omphalotus illudens). Richard added

“I can't say I have really tried [to look for them] in part because it is dangerous enough walking around the forest, let alone in the pitch black. [Mycologist] Alan Rockefeller describes scouting out a clear path or perhaps a logging road in the daylight, camping nearby and then taking a walk once it is really dark and your eyes have adjusted.”

However, we do have plenty of fluorescent mushrooms in the area. Rather than bioluminescence, where the organism is producing its own light from a chemical reaction, fluorescence is when something appears to glow because it has absorbed one wavelength of light (from, say, a special flashlight) and then slowly releases a different wavelength of light. The WPMC has recently gone on night hikes equipped for just such occasion! Richard did note, though, the importance of using UV light that removes the visible purple light, which helps avoid looking at mushrooms just reflecting the purple. What did they see?

“In general Russula species tend to fluoresce shades of yellow to green, especially the gills, but also the cap... There was an Entoloma species that fluoresced a nice shade of blue, and another species that was possibly Flammulaster erinaceellus that was bright orange.”

It sounds like the group had quite a magical evening!

“When we started the walk we did not really know what to expect so there was a lot of excitement when we found our first bright green fluorescent mushrooms, even thought they were tiny. Lots of the mushrooms were little brown mushrooms that would be easily overlooked in the daylight. As we proceeded further on the path through the forest, finding different colored species caused the group to gatherer and admire them with oohs and ahhs! You could spot the fluorescing mushrooms from quite a distance so were able to scan the area either side of the path.”

Connecting to the Outdoors Tip: The Western Pennsylvania Mushroom Club is a great group to connect with if you’re interested in learning more about the mushrooms in our area — or even just fungi in general. You can check out their website here to look up events and educational resources! Club secretary, Julie Travaligni, echoed the feeling of wonder seeing her own fluorescent mushrooms for the first time: “When I first learned about bioluminescent fungi, I almost couldn’t believe it. I mean, mushrooms were already really cool and totally fascinating but to then add glowing in the dark? I had to learn more. My first trek into the woods for glowing mushrooms was so great. Even just hearing the woods at night, a time I’m not usually in the woods, added a whole new layer to the experience. Seeing that faint green glow was amazing.”