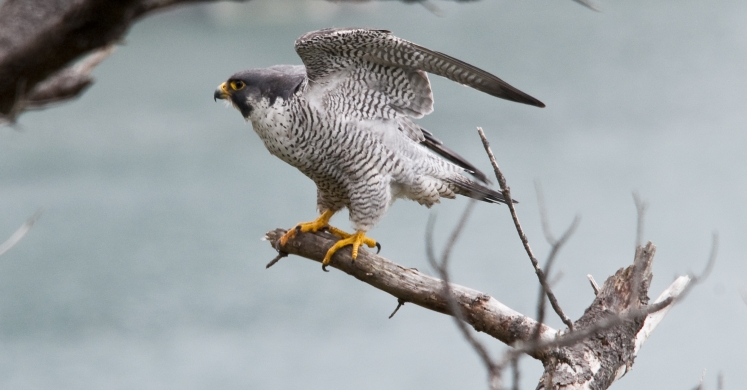 This is a story about the fastest animals in the world, living right here in Pittsburgh! No, not cheetahs, those are the fastest land animals. Today I want to focus on a bird that reach top speeds of over 200 miles per hour in a full dive, a bird that easily carries the fastest traveler title—the peregrine falcon.

Peregrine falcons are a medium-sized raptor (bird of prey) that specializes in hunting other birds, and they use their top-speed dive to pummel their prey mid-air. They are a non-migratory species, though they might wander from their nesting territory during the winter. In urban settings, these falcons nest on skyscrapers and other tall buildings, but outside of urban areas, they are cliff-nesters and prefer rocky outcroppings overlooking rivers or other waterways.

Though they are flourishing now, peregrine falcons are a conservation success story in the same vein as the bald eagle. Like our national bird, peregrine populations were decimated by the early twentieth century, in part due to hunting, but largely by the pesticide DDT. Though peregrine falcons primarily eat other birds, many of their common prey species were eating diet items contaminated by DDT (this process of contamination moving through the food web and collecting in the tissues of predators is called biomagnification.) After DDT was banned in 1972 and conservation efforts became a priority, peregrine falcons’ numbers began to rise again. They were removed from the federal Endangered Species lists in 1999 and have continued to thrive ever since.

Here in the ‘Burgh, we have two nesting pairs of peregrine falcons: Hope and Terzo, who reside on the University of Pittsburgh’s Cathedral of Learning, and Dorie and Louie, who currently seem to favor a building downtown on Third Avenue. Hope and Terzo are famous as the stars of the National Aviary’s primary nest camera. Currently, the pair has four eggs incubating in the nest, and we can expect hatching to begin somewhere around April 20.* Dorie and Louie, on the other hand, have selected a number of different nest sites downtown over the years, but when they use their Gulf Tower nest, they also have a nest camera.

Local birding blogger Kate St. John is probably the ultimate authority on the peregrine falcons in the city. She regularly monitors the nest cameras and shares updates on the birds through her blog Outside My Window.

“Peregrine falcons are such charismatic birds,” Kate notes. “They're fast and agile, fierce and reckless. I love to watch their beautiful courtship flights and spectacular hunting dives, and I learn a lot about nature by watching them interact with each other, and with other species. Peregrines are very different than humans but there are truths we all share.”

Note: nature is a neutral force, neither benevolent nor cruel, and we humans are often disturbed by what we see in raw reality. The Cathedral female Hope has been known to display a startling behavior when her eggs hatch, and local experts urge caution if watching the camera around hatch time. Humans are not interfering because Hope’s behavior is simply nature running its course.

Connecting to the Outdoors Tip: You don’t have to go far to see wildlife in Pittsburgh—they are all over the city! Kate St. John tells us the conservation lesson to be observed from that: “Birds of prey that live in the city are the ones who benefit from the city's prey species and protection.  Cities don't have high quality native songbirds but we have a high quantity of birds and rodents to eat – and the quantity matters.  Peregrines eat pigeons, Coopers hawks eat starlings and house sparrows, red-tailed hawks eat mice, rats, and squirrels.  Also, Pittsburgh's three rivers that are cleaner than they used to be so there are lots of fish for bald eagles and ospreys.”

Outside My Window: Peregrines Category