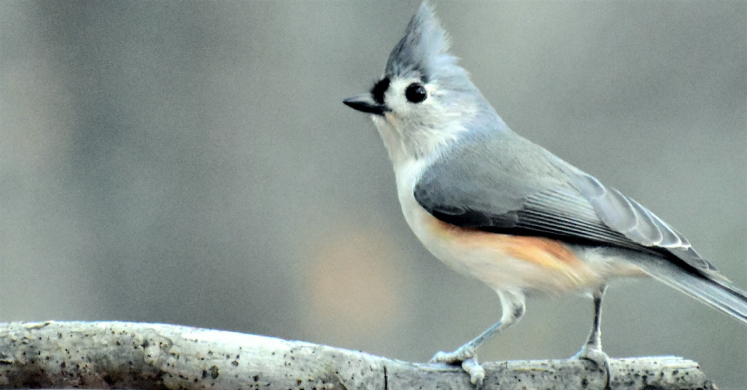 The early morning call wafted in my windows and through the curtains. I rubbed my eyes sleepily as my “alarm clock” continued…peter peter peter peter peter. The dawn chorus of birds was in full swing, and one individual was undoubtedly close to the house and singing with particular gusto: a tufted titmouse.

Darrell Peterson/Macaulay Library at the Cornell Lab of Ornithology (ML219427781)

The tufted titmouse (Baeolophus bicolor) is a small songbird (Passerine) native to the eastern half of the United States, and they are aptly named for the little grey “tuft” of a crest on top of their heads. Their native habitat is typically forested areas, but they have adapted to the presence of us humans and can also be found near parks or even neighborhoods that are somewhat wooded (like mine). They are cavity nesters, and after finding a good hole in a tree, they will line the nest with grasses, animal fur and other bits of fuzzy materials. And as the Audubon Society notes, these brazen little birds sometimes even pluck fur from living animals!

Another interesting thing about these birds is that they are non-migratory meaning they are year-round residents (we regularly see them on Christmas Bird Counts.) During the winter, they eat seeds, plant materials, any insects they might find, plus they are a common sight at bird feeders. Once the warmer is warmer, though, they switch to a largely insectivore diet. Notably, when titmice do eat seeds, they tend to opt for the largest seeds they can get, even if it takes a bit of work to open them, like in the video below.

Dave Rintoul/Macaulay Library at the Cornell Lab of Ornithology (ML201664831)

Another fascinating thing about tufted titmice is that very thing which woke me up earlier this week: their calls. They are so much more than just sounds! Titmice are actually quite adept at encoding all sorts of important information into their calls. Not only do they have alarm calls, which alert other titmice in the area to an approaching predator, but they can let others know about what kind of predator is approaching, how large it is and even how much of a threat it poses. And what’s even more interesting is that much of this information can be interpreted by other bird species through a process called interceptive eavesdropping. Animal behaviorists have noted that relatives of titmice, the chickadees, are capable of interpreting the calls of titmice and appropriately responding to the threat. What intriguing interspecies communication!

So the next time you’re outside, listen for little series of peter, peter, peter, and look for a little gray bird. Like everything else in nature, there is always something more than meets the eye!

Connecting to the Outdoors Tip: Even if you live in the suburbs, tufted titmice are common birds at feeders. Keep an eye out for a small gray bird that has no problem bopping chickadees out of the way! If you would like to leave a little treat for your feathered neighbors, here is a recipe for warmer weather "suet" block:

Start by microwaving your peanut butter for 15-20 seconds, just to mix it a little easier. Then add your other ingredients into a bowl and start mixing. This recipe is more of an art than a science - you are looking for a mixture that is perhaps still a bit crumbly but will press together. Feel free to adjust your ratios slightly, small spoonful at a time.

Once all of your ingredients are well blended, you can either press them into a shaped container like I did for my feeder, or you can even press the mixture into the cubes of an ice tray of you would like to leave out little blocks at a time.

After your mixture is pressed into a container, place it in the freezer for ~30 minutes to stiffen the peanut butter back to its normal consistency.

After the freezer, your bird treat is ready! I placed mine in a bird feeder, but if you would like to leave yours out, just look for a place that would be difficult to for squirrels and cats to access. Happy birding! 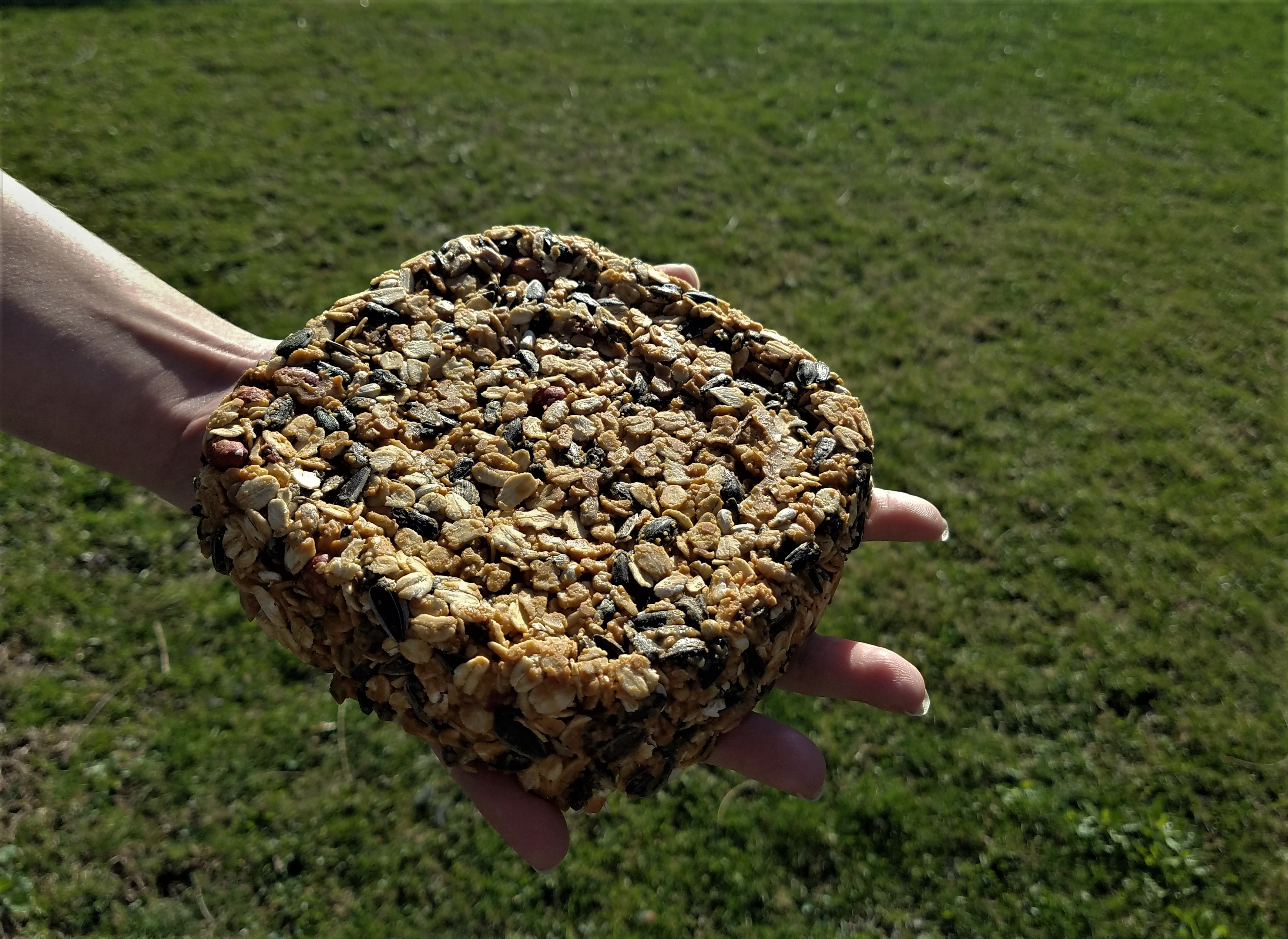 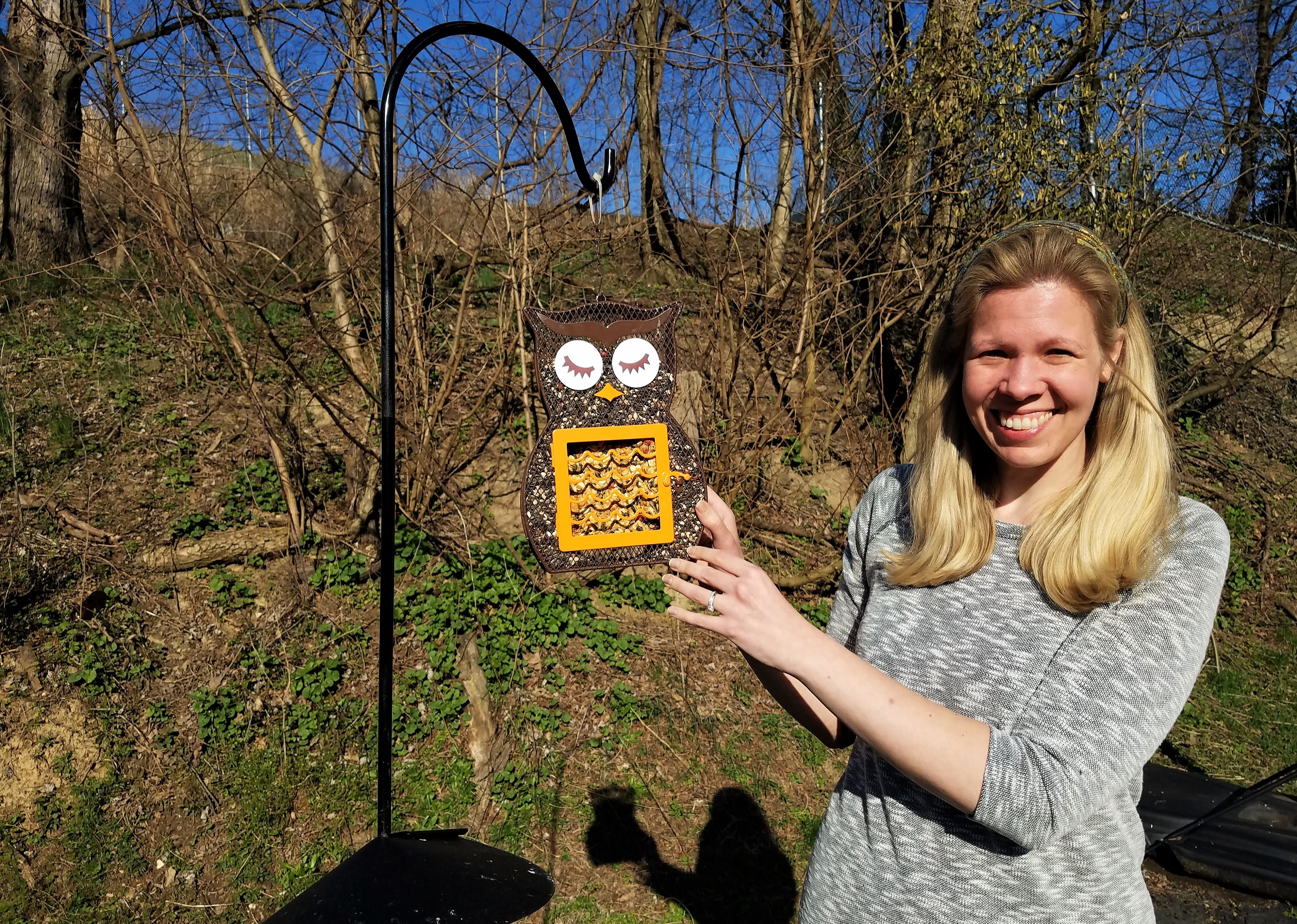 All About Birds: Tufted Titmouse