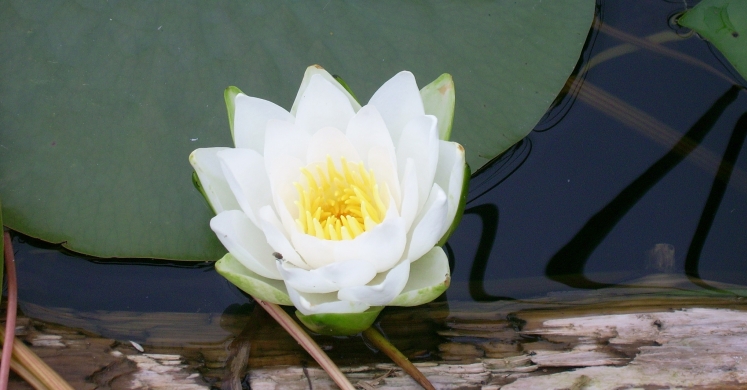 Phipps feels like a dream in Monet’s garden at Giverny at the moment; and one staple to both Monet’s works and the gardens at Phipps is…the water lily. From quiet summer afternoons by a backyard pond to fairy lore, there are few aquatic plants that capture our attention and romantic sensibilities like water lilies. Even part of their scientific name, Nymphaea, was derived from the mythology of Greek nymphs—enchanting spirits in nature. These plants are a staple in our vision of an idyllic pond, but they are also ecologically important. Let’s explore a bit more!

Here in Pennsylvania, our native white water lily, also called the fragrant water lily, (Nymphaea odorata) can be found in relatively shallow waters of ponds or calmer waters. The plants are anchored to the substrate (the materials at the bottom of the pond) by a rhizome, a large clump of tubers. Small roots extend from the rhizome and help anchor the plant in place. If you are as excited by the change of season as I am, by now you have probably noticed new lily pads, the leaves of water lilies, unfurling from underwater or already laying on the surface of the water. There may be flower buds, but we are still waiting patiently for most of our waterlilies to bloom. Blooming normally begins in May and can last all summer.

These aquatic plants may be lovely, but water lilies are more than just a pretty flower! The flower and lily pads provide a home to aquatic macroinvertebrates—the insects, freshwater crustaceans, and such—who live in the water, and the fragrant blooms attracts a variety of pollinators. The water lily’s method of attracting pollinators is somewhat unusual, though. Before they even produce pollen, water lilies create a small pool of sweet-smelling nectar in the center of the flower to begin attracting pollinators. Two or three days later, pollen is ready to be carried away by any visitor searching for nectar. Even after a water lily wilts at the end of the season, the old plant material becomes nutrient-laden detritus at the bottom of the pond—food for other aquatic organisms.

However, in a twist from our usual perspective, the fragrant water lily has actually become an escaped cultivar in both Europe and in Western US—hybridizing with their own respective native water lilies and confounding conservation efforts. Though hybrids grow just as well as either parent species, if not better, the hybrids themselves are often sterile, depending on the combination of species. We are used to avoiding introduced cultivars as we plant our own native flowers, but the same concept holds true no matter where you live—native plants in your garden are best!

Connecting to the Outdoors Tip: Water lilies are best found in ponds and wetlands, and at Phipps, you can see them in the lagoon at the CSL plus we’re also growing some in the Serpentine and Victoria Room during the summer show Monet in Bloom, designed by our Associate Director of Exhibits, Jordyn Melino! “This show is particularly magical,” says Jordyn, “As guests are immersed in some of Monet’s paintings brought to life using plants as our palette and our Conservatory as our canvas. The East room is a dreamy setting from Monet’s Luncheon under the Canopy, where guests may take a seat at the table set for a feast while enjoying the view of beautiful blooms.”

University of Massachusetts-Amherst: Pollinators in the Landscape II

Nierbauer et al. 2014 – The widespread naturalisation of Nymphaea hybrids is masking the decline of wild-type Nymphaea alba in Hesse, Germany