Effects of Prenatal Obesogen Exposure Echo Down the Generations

Bruce Blumberg, Ph.D., professor of developmental and cell biology at the School of Biological Sciences, University of California, Irvine, presented recent data pointing to heritable factors beyond diet and exercise that may contribute to the obesity epidemic.

“It’s obvious that diet has something to do with obesity,” Dr. Blumberg said. “But it’s equally obvious that since the rates are continuing to increase, despite unprecedented awareness of the problem, maybe there’s something else going on.”

The worldwide obesity epidemic statistics are alarming, Dr. Blumberg said, citing the latest numbers from the Centers for Disease Control and Prevention that nearly 40 percent of the American population is obese, with African Americans and Hispanics reaching as high as 50 percent, or over that in the case of women. Additionally, health care costs related to obesity have reached the hundreds of billions, he said.

Acknowledging a lack of explanation for the epidemic in the literature — including a 2016 analysis of National Health and Nutrition Examination Study data finding that despite the same caloric input and energy output, the average person’s body mass index was 2.3kg/m2 higher than in 1988 — Dr. Blumberg’s lab investigated prenatal exposure to endocrine-disrupting chemicals as a possible link to obesity — the “obesogen” hypothesis, he said, referring to a term he coined in 2006.

“Calories in, calories out, all by itself is inadequate to explain the rise in BMI. Something else is superimposed on that,” he said. “We know stress, disrupted circadian rhythms, viruses, the kinds of bacteria that live in your intestines — all these have something to do with obesity. We know from a lot of epidemiological studies that prenatal nutrition has something to do with obesity. This prenatal experience has a lifetime effect on health.”

In laboratory mice, Dr. Blumberg and his colleagues showed that in utero exposure of pregnant mice (the F0 generation) to the obesogen chemical tributyltin (TBT), at low levels of parts per billion, had effects through the F3 generation (Chamorro-Garcia et al., 2013).

“What we could show was the animals didn’t weigh any more, but they had more white adipose tissue, the kind we don’t like to see,” he said. “More fat cells, bigger fat cells and fatty livers, and the brown fat didn’t work correctly anymore.”

In a replicated transgenerational study, Dr. Blumberg’s lab showed diet effects on the F4 generation of mice — “in human terms, the great-great-grandchildren of the exposed mom,” he said.

The male F4 descendants displayed resistance to losing fat, even after fasting or changing from a higher-fat to a lower-fat diet. The F4 females did not experience these effects.

Dr. Blumberg explained this phenomenon as a change in the organization of DNA within the nucleus of fat cells of the male mice — particularly in areas where obesity-related genes are located (Chamorro-Garcia et al., 2017).

“When we looked at gene expression through that lens, all the sudden we could see there were quite a few genes involved in the development of fat and the metabolism of fat that had their expression changed,” he said. “So these animals are resistant to leptin, a key regulator of energy balance, as a result of their great great-grandmother’s exposure during pregnancy.”

Because diet and exercise may not be the “whole story” behind the obesity epidemic, Dr. Blumberg said that humans should pay attention to this research, particularly as it’s been proven that certain pharmaceuticals are obesogens.

“A key point [of the study] is that prenatal obesogen exposure re-programs the exposed animal and their descendants to be fat. It’s altering the structure of DNA that leads to heritable changes.” 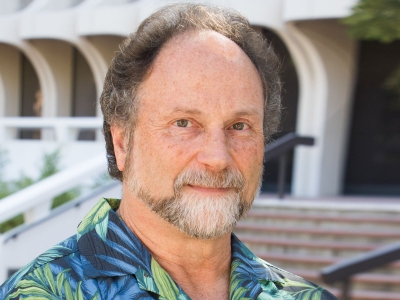 Bruce Blumberg received the Ph.D. in 1987 from UCLA, where he studied the molecular biology and biochemistry of basement membranes. His postdoctoral training was in the molecular embryology of vertebrate development with Eddy De Robertis at UCLA from 1988 – 1992. Dr. Blumberg trained in molecular endocrinology at the Salk Institute for Biological Studies, joining the laboratory of Ronald M. Evans as a staff scientist in 1992. There he led the effort to identify new hormones that act through so-called orphan nuclear receptors. Dr. Blumberg joined the faculty at U.C. Irvine in 1998 where he is currently Professor of Developmental and Cell Biology, Pharmaceutical Sciences and Biomedical Engineering

The Blumberg laboratory studies the biology of nuclear hormone receptors in development, physiology and disease. Particular interests concern the early patterning of the vertebrate nervous system, and the links between exposure to environmental endocrine disrupting chemicals and the development of cancer and obesity. He proposed the obesogen hypothesis which holds that exposure to chemical "obesogens" important factor predisposing individuals to weight gain and obesity. His laboratory showed that exposure to obesogenic chemicals leads to increased adiposity in vivo and that many candidate obesogens can induce stem cells and preadipocytes to differentiate into adipocytes in vitro. His laboratory recently demonstrated that maternal obesogen exposure leads to epigenomic changes that can be transgenerationally inherited through at least the F4 generation, predisposing exposed animals to obesity and modifying individual response to diet.