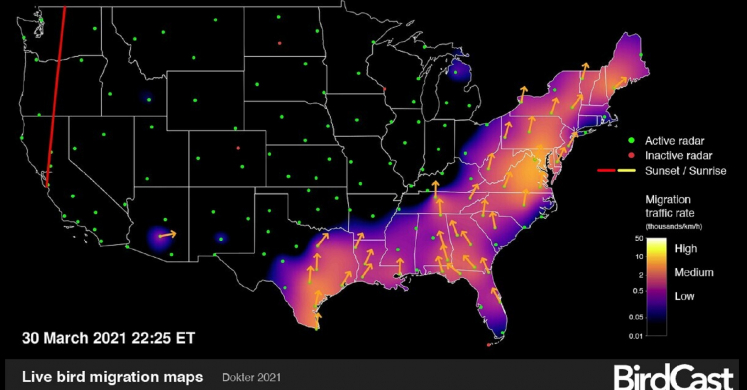 Heavy traffic ahead! Pennsylvania is a part of an eastern seaboard super highway, but it’s not cars we’re talking about – it’s birds. Spring migration is well underway, and if you check out the real-time analysis maps at Cornell University’s BirdCast, you can see the night sky filled with activity from birds traveling north for the summer breeding season. What’s happening during migration, and how can we humans help birds on their way? Let’s explore!

First, to help get perspective on the journey that birds travel seasonally, we can look at the North American flyways. A flyway is the approximate route that birds will take from nesting grounds to wintering grounds and vice versa. Here in Pennsylvania, our migratory birds tend to follow the Atlantic migratory flyway down to Florida, the Caribbean or Mexico; but North America has three other flyways known as the Central, Mississippi, and Pacific flyways, as seen in the map below. 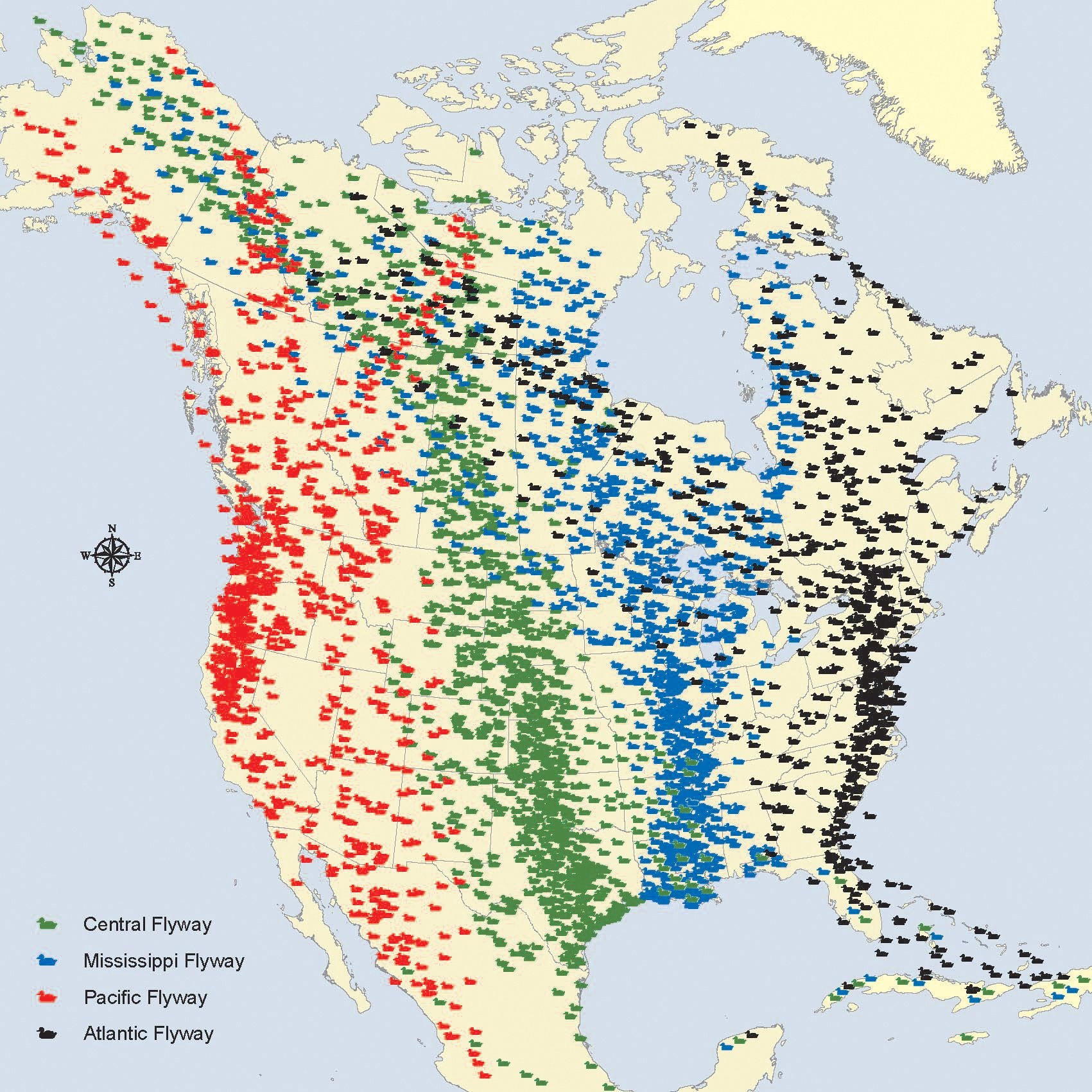 While looking at the map, we can keep in mind that even tiny birds like the ruby-throated hummingbird will travel incredible distances. Just the trip from Pittsburgh to the Caribbean, a common destination for our birds, is 1,200 – 1,500 miles as the crow flies, so to speak. And some species will even make the jump from Florida to Mexico, traveling non-stop across the Gulf!

With the extreme amount of energy that is needed to make a journey like that (and to make it twice a year!), why do birds migrate? For birds, the need to travel seasonally is largely due to food availability during winter. Species that exclusively prefer fruits, nectar, or particular insects for a meal will have much lower success in a wintry Western Pennsylvania than species who are either open to a wide variety of food sources or who have diet preferences of winter-safe foods like nuts and seeds. In fact, some of the most common year-round resident birds in our area (black-capped chickadees, northern cardinals, blue jays, mourning doves, American goldfinches, downy woodpecker, tufted titmice, white breasted nuthatches, and house finches) all either live entirely on nuts and seeds or are such generalists with their diets that they find plenty of food during cold months. Black-capped chickadees will even pick at frozen carcasses in winter for a little extra protein!

This actually means that not all birds are migratory.  In fact, some species have both migratory and non-migratory populations. A number of warbler species, for example, may have populations living alongside each other during the summer, but one population migrates seasonally and the other stays put. Earlier this year, we noted the variation in junco migration; and there is also a strange phenomenon known as “leapfrog migration.” Particularly noted in golden eagles migrating from Eastern Canada, leapfrog migration involves birds from farther north (e.g., Northern Quebec) ultimately traveling much further into the southern US than birds who live near the US-Canada border. So the northern birds’ migratory routes “leap over” the routes of the southern birds. Think that's crazy? Now what do we do about juvenile bald eagles in Florida who migrate north seasonally? Birds are wild!

What’s exciting, though, is that through radar technology, we can track bird migration in real time! Cornell’s BirdCast project uses past and present radar to monitor migration in real-time and predict when is likely to be a high-traffic time. How does this work? Radar systems send out electromagnetic waves into a target area. The waves will bounce off of different objects and some of the waves will return to the radar’s receiver to help create an “image” of that area. For a weather system, the waves bounce off of precipitation and help create an image of storms and weather conditions. BirdCast technology specifically looks at the radar signals from birds, which is tricky and requires a suite of algorithms plus human quality control and monitoring (read more about how the system filters biological and non-biological signals here.)

How Can We Help?
As cool as it is to learn more about how and when birds migrate, it’s also important to keep in mind what we can do to help them. We share our lands and skies with our wild neighbors, so it’s important to be a good neighbor. Here are a few things we call can do!

Preventing Window Strikes – Birds can’t process the reflective sight of a window like we can, which means window strikes (birds literally flying into windows) is one of their biggest conversation threats. And it’s not just high-rises that can be a problem; any window can be tricky to a bird. However, we can help by making windows more visible to birds! BirdSafe Pittsburgh has a number of suggestions, including adding some fun décor like cut-outs to your windows, applying films or decals, or even selecting bird-friendly glass.

Lights Out – Light pollution can interfere with birds’ navigation on their flights, but we can help by turning off unneeded lights at night. The Audubon Society has partnered with a number of organizations to help cities make lighting decisions that are both bird-safe and people-safe, so check out their work here.

Keep Cats Indoors – The single biggest, directly human-caused threat to birds are outdoor cats. Depending on the estimate, outdoor cats kill 1-4 billion wild birds a year, but we can make a huge difference here by spaying/neutering pet cats and keeping them indoors. This helps prevent unwanted kittens (and perpetuating feral cat populations) and it keeps Duchess and Mr. Fluffles just a little bit safer themselves.

So as our birds all return, let’s make sure we are being good neighbors to them – and listen for those dawn choruses to have more voices joining in!

Connecting to the Outdoors Tip: If you are a journaler, keep track of the first dates you see different bird species back in your neighborhood in spring! Observations like these can show different trends over the years.