We Are What We Eat: Non-Stick Chemicals, Plasticizers and Other Contaminants in Our Food and Our Bodies

Alexis Temkin, Ph.D., a toxicologist for the Environmental Working Group, elaborated on ways that food is a major route of human exposure to chemicals, including endocrine-disruptors.

Dr. Temkin discussed how foods become contaminated by the intentional addition of chemicals to food — additives, flavors, surfactants and pesticides — or by accidental means of environmental bioaccumulation of legacy contaminants and migration from food contact materials.

“Sometimes we don’t really know where a contaminant might come from, but it’s involved in food processing,” she said.

A publically available list from the U.S. Food and Drug Administration entitled Everything Added to Food in the U.S. (EAFUS) enumerates thousands of chemicals.

“You can see that many, many, many of them don’t have toxicity data,” Dr. Temkin said. “But they are still used and approved. A lot of that has to do with a policy called ‘Generally Recognized as Safe.’ Things that have been used in the market for a long time, even as science has evolved, have not been re-evaluated.”

Research has found foods containing surfactants and emulsifiers, such as ice cream, may disrupt the gut microbiome (Groh et al., 2017), and that food packaging containing endocrine-disrupting chemicals risk food contamination. Phthalate levels exceeding European safety standards have been found in bread (Serrano et al., 2014), though the specific source is unknown. One study by the Environmental Working Group found per- and polyfluorinated compounds present in 50 percent of bread and dessert wrappers and 38 percent of sandwich and burger wrappers (Schaider et al., 2017).

Phthalates are used in plastics to increase flexibility and has been associated with several human diseases, including male fertility issues. Some regulations on phthalates exist in Europe.

Per- and polyfluorinated compounds function primarily as non-stick chemicals, and they’re used as grease and oil repellents in fast food. They are associated with health effects like cancer, immunotoxicity, low birth weight, obesity, increased cholesterol and differentiation in sex hormones. Washington State recently passed House Bill 2658 to ban perfluorinated chemicals in food packaging if alternatives can be found.

“And children might have some interesting behavior patterns when it comes to consumption,” Dr. Temkin said. “They might eat one type of food over and over. If that might happen to be something that is laden with a specific pesticide or contaminant, then the risk of exposure is going to be higher.”

Though some studies on dietary behavior change have been done, Dr. Temkin said it’s “complicated.” However, an organic diet for children has been shown to expose them to less pesticide residue. Other studies have concluded that reducing dairy and meat consumption may reduce chemical exposure.

The Environmental Working Group releases an annual “Dirty Dozen” and “Clean 15” guide to help consumers determine which produce are exposed to high levels of pesticides. 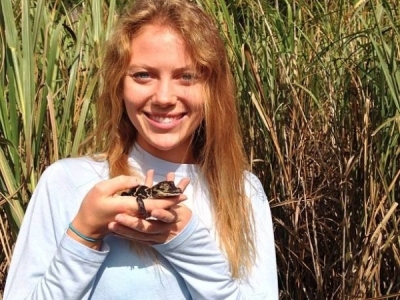 Alexis, originally from Chappaqua, NY, recently moved to Washington, DC to join the investigative science team at Environmental Working Group as their toxicologist. She earned her bachelor’s degree in Biological Sciences from Connecticut College in 2010, then began her research career at Columbia University Medical Center working as a lab technician studying the molecular mechanisms responsible for environmental influence on gene regulation. She then moved to beautiful Charleston, SC to attend the Medical University of South Carolina where she earned a Ph.D. in Marine Biomedicine and Environmental Sciences, studying how exposure to environmental chemicals during development can influence adult disease development, specifically obesity and metabolic syndrome. In her spare time, you can probably find Alexis in a yoga studio, exploring the closest outdoor park, attending a dance performance or cooking vegetables.