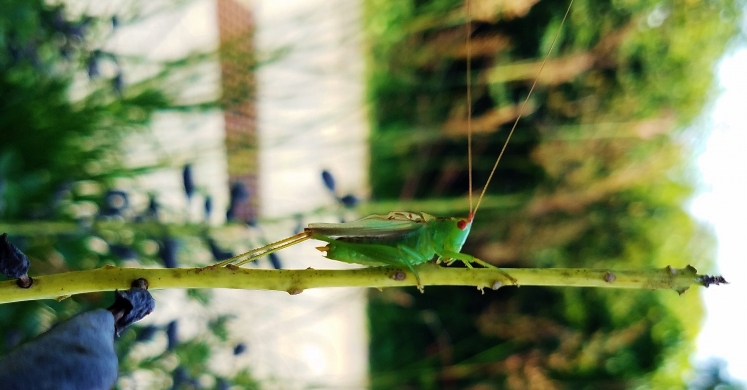 We have less than a week left of summer, and my favorite part of this time of year is the veritable late summer insect symphony that greets me every time I open my windows or a door! Katydids, crickets and other insects individually make their own distinctive brand of buzzing, clicking and trilling; and collectively we are treated to a symphony of late summer. Let’s explore a few of things we are hearing, shall we?

Katydids
Cousin of crickets, locusts, and grasshoppers, katydids tend to grace us loudly with their songs in late summer and into fall. With exceptions in a few species, it is usually the males who call as they either work to attract females or defend themselves. Intriguingly, have you ever noticed how some katydids seem to call in near unison to each other? This is actually a competitive strategy to attract females — each of the “singing” males is trying to be the first to hit the next note of the call and catch the attention of females who may be nearby. They make their calls by rubbing their forewings together, as you can see in the video below taken next to Phipps’ Outdoor Garden

Crickets
Crickets also use their forewings to produce their calls, and like katydids, it’s primarily a male behavior. Each species has its own unique call, and even crickets that are nearly identical in appearance can produce dramatically different songs.

Cicadas
The classic sound of late summer is raspy chatter of the annual cicadas, sometimes called the dog day cicadas. We’re just past the peak of these noisy arthropods, but have you ever wondered how exactly they make that sound? While we use our larynx to produce sounds, cicadas use an organ built in the abdomen called a tymbal (note, the tymbal can be in the thorax of other species). The tymbal includes a series of bowed “ribs” inside the wall of the exoskeleton and muscles that connect to the ribs. To create a single sound, the little muscles pulls the ribs until they buckle and then release them, which produces a little clicking sound. This process of muscle contraction, buckling ribs, and a clicking release repeats in super speed, and we interpret the rapid series of clicks as the classic buzzing of a cicada. The sound resonates within the air sacs of the abdomen, which helps make cicada buzzing as loud as lawn mowers.

What Are We Not Hearing?

One thing you may have noticed you are not hearing an abundance of this time of year is bird song. Back in the spring, we heard birds making all sorts of calls to stake out and territories, as well as attract mates. This time of year, though, birds are not as vocal. They may be all around us, but they call less frequently and with less vigor. On top of that, a few species have already begun migrating. Some hawks, warblers, and hummingbirds began making their way south as early as last month. (Personally, the last few evenings I have heard crows, blue-jays, catbirds, and the intense chirping of what sounds like a few persistently annoyed cardinals.)

This time of year, frogs are not particularly vocal either, but some of the last frogs to call in the summer (through August, at least) are bullfrogs, a few tree frogs, or perhaps the Fowler’s toad. The primary reason for their relative silence (especially compared to the complete raucous that is the spring!) is that calling is largely a courtship or territorial activity—males in particular often call to attract females—but once breeding season is over, there is little reason for a frog to broadcast its position or waste the energy. If you do hear a Fowler’s toad or a tree frog, their calls vary by geography and by weather conditions. Their trills can lengthen or shorten, and sound either higher or lower to us. Do you recognize any of these calls?

A Fowler’s toad calling the midst of spring peepers:

Gray Tree Frog, most likely to hear them at dusk or on rainy evenings in the spring and summer, possibly as late as August.

Even without the a full back-up orchestra of birds and frogs, insects make their presence known loudly and proudly in the late summer, and there is nothing quite like it. If you have an evening before the weather changes, I hope you have a chance to spend it just listening to a symphony that no human instruments can recreate.

Connecting to the Outdoors Tip: In the next few evenings, try to find a spot outdoors that is relatively free from the sounds of traffic, and use the voice memo on your smart phone to record the cacophony of insect calls that you hear. I even use a phone that is a few generations old, the audio recordings are great for a little snippet reminder of bird calls, insect calls, etc.

Science: The Secrets of the Cicada Chirp